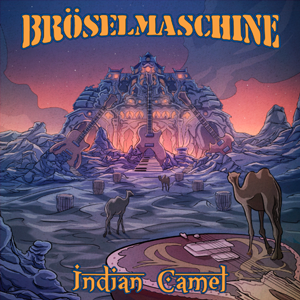 PRINT_Cover (6.2 MiB, 3 hits)
You do not have permission to download this file.

WEB_Cover (2.7 MiB, 0 hits)
You do not have permission to download this file.

Presskit_PRINT (64.6 MiB, 2 hits)
You do not have permission to download this file.

Presskit_WEB (33.9 MiB, 0 hits)
You do not have permission to download this file.

32 years after the release of their last studio album (Graublau, 1985) the Krautrock veteran Bröselmaschine is back with a phenomenal new album. Diverified, soulful  and skillful the formation around guitar guru Peter Bursch is presenting the new songs. In June 2014 the remarkable debut from 1971 was voted by the New York music blog Pigeons & Planes on rank 9 of the most important Krautrock albums.

The new album Indian Camel with female singer/model Liz is again an odor signature for eternity.

In 2017, the German band Bröselmaschine presents “Indian Camel”, a new studio album bearing an impressive stylistic diversity and a captivating groove. Covering a wide range from Indian sounds over to jazz and folk up to earthy blues rock the convertible band offers a musical adventure of the fascinating kind.

Bröselmaschine is one of the most influential and durable bands of the republic. The

Duisburgers gave guest performances with Pink Floyd, King Crimson, Jethro Tull, T. Rex, Hawkwind, Fairport Convention, Uriah Heep and many more; they have been on tour nearly all around the globe and in founding member Peter Bursch “the nation’s guitar teacher” among their ranks. Thanks to his widespread textbook numerous generations learned to play guitar in a simple and fun way. Among them were a lot of later music professionals. His method became a worldwide bestseller and Peter Burschs “Gitarrenbuch” sold more than two million copies to date.

The tracks of the album “Indian Camel” were played and recorded live in the studio. “That’s how we recorded our early records and the way we are used to work”, explains Peter Bursch. The musicians decided to name the album after the track of the same name because the song has many tonal colors: sitar and tablas provide the Indian feel; the guitar cites Ravel’s “Bolero” and in parts you can hear club sounds like in disco on Ibiza. “’Indian Camel’ is our most important piece on the record”, Bursch says, “We have played it in the studio only once. In my head, I had this sitar melody and the rhythm. I played it to the others and they joined in, the recorder was running and after twelve minutes the track was finished. That was huge. We all had goose bumps!”

The special atmosphere of this recording session permeates all tracks of the new album. In “Fall Into The Sky” music comedian Helge Schneider is playing the saxophone, Liz Blue unfolds her beautiful voice, while later, a jazzy piano joins in.

“We value a transparent sound! What instrument is in the foreground, changes within the recording. The piece has a 7/8 groove, and for some time, we did not really know what to do with it. But when the keyboarder came up with this hymnal chorus and a superb solo, the sun was rising!”

Originally, “Peace Of Heaven” was a guitar piece which Peter Bursch had also been rehearsing with his students. “Such a song is typical for Bröselmaschine. We always had these acoustic pieces in our set.” Quite unususal however, is their cover of the T. Rex hit “Children Of The Revolution”. “The ‘Eclipsed’ music magazine approached us at the Burg Herzberg festival where we are playing nearly every year. The editors wanted a contribution for the promo CD of a book project. They wanted a T. Rex cover. At the rehearsal room we were playing around and suddenly we were in ‘Children Of The Revolution’. Then I added the sitar for the typical Bröselmaschine touch. In the 1970’s we once had a performance together with T. Rex in Munich. Their singer Marc Bolan stormed on stage to play with us. He was pretty stoned indeed, so a couple of roadies shoved him aside…”

Founded in 1968, Bröselmaschine presented their debut with the same title in 1971 and went on tour for a longer period. Then followed the albums “Peter Bursch  und die Bröselmaschine” (1976),  “I Feel Fine” (1978), “Graublau” (1985) und “Live” (2006). The apparatus which inspired their name in those days was a device grinding hashish to crumbs to fall directly into the prepared joint.

At the beginning of the new millennium awoke a new interest in the marathon rockers. “The ‘Rockpalast’ called. The editors wanted to produce a ‘Krautrock Special’, and we confirmed. They wanted us to revive our music of the 70’s. I rounded up the old members of the band. The magic was back again immediately”, raves Bursch. That was the initial spark for the reboot of Bröselmaschine.

After that “promoters called continuously. We needed an extra agency, because I cannot handle all the work on my own”, he reports.

In the meantime, a lot of young people get interested in Hippies, their time, values and music. “We get the impression their numbers are growing steadily”, Peter estimates. “At the Burg Herzberg festival up to 12,000 people of all ages meet. They go along with our long songs, and together with the band they create an atmosphere that reminds us of our concerts in the 70’s…” 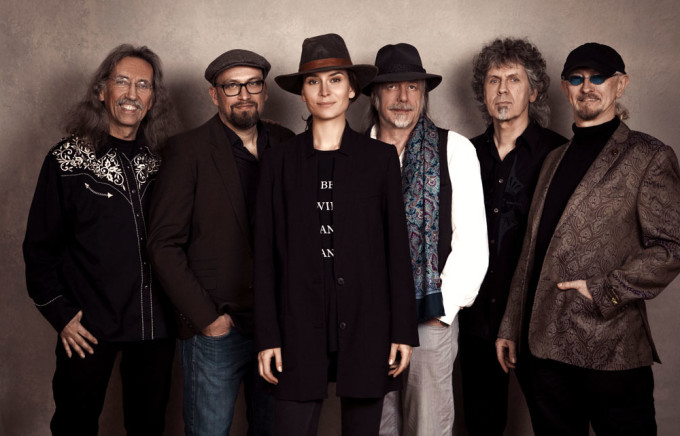