The Vision, The Sword And The Pyre Part 2 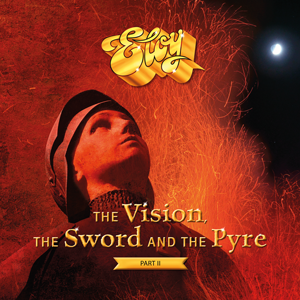 PRINT Cover (2.0 MiB, 3 hits)
You do not have permission to download this file.

Presskit PRINT (3.1 MiB, 4 hits)
You do not have permission to download this file.

Presskit WEB (2.0 MiB, 3 hits)
You do not have permission to download this file.

The Vision, The Sword And The Pyre Part 2

Frank Bornemann, the Grand Seigneur and mastermind of the German art rock legend ELOY, now presents Part 2 of his impressive and moving opus magnum on the fascinating history of Joan of Arc. The author, who has French roots himself, first realised this ambitious work in English as a band version, predominantly with musicians under the successfully established ELOY trademark. But there are also big choirs to be heard on this rock opera, various contributions by guest musicians, which effectively complement the band instrumentation, and also spoken parts at special moments.

Part 1 has already attracted a lot of attention worldwide because of its extraordinary musical design and blend of sounds. It has received top marks in the media, achieved remarkable chart placings, and also attracted attention on a cultural level because of its authentic, completely uncoloured factual content.

In order to bring the listener very close to all the details and avoid romanticising the story, the author describes the events without comment from the perspective of Jean de Metz, the faithful companion in arms and confidant of the heroine. There are therefore no individual interpretations of the historical events in the sung texts and spoken contributions.

Next to the music, it was important to the author to create a work based exclusively on proven real events, and therefore as close as possible to the truth. It was also important to him not only to boldly illustrate the well-known passages and stages of the fate of the Virgin of Orleans in words and music, but to capture all the events within their entire context and reproduce them unabridged in sequence.

Although many years of research have made Bornemann profoundly knowledgeable about the story, he has attempted to get even closer to the core of the truth by studying the sources intensively in order to decipher details of the events in the Middle Ages, which remain puzzling to this day and controversial among experts. Olivier Bouzy, the director of the Centre Jeanne d´Arc in Orleans, who helped to clarify some of the background issues thrown up by the complicated questions, supported him in his research.

The album, initially released on CD and vinyl under the trademark ELOY, is to be followed by a stage version with the title “La Vision, l´Épée et le Bûcher” in French performed by an ensemble as a “Spectacle Musical” at suitable locations. Like the recording, there will be no sung dialogues of the kind usually found in musicals or operas. Spoken scenes will be reserved for the actors, while the music will be left to the musical ensemble. The author has a synthesis of theatre and music in mind.

With Part 2 of his opus, Frank Bornemann has certainly come closer to his goal of creating a very special work, which is not only musically impressive, but also emotionally profound and moving. It will take the listener and surely, later, as a stage version, the audience on a moving a journey to a fascinating historical event.