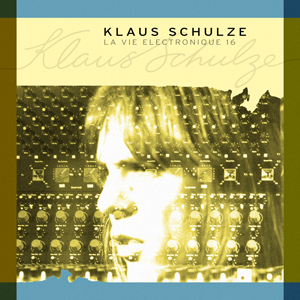 PRINT Cover (3.7 MiB, 0 hits)
You do not have permission to download this file.

PRINT Kit (4.5 MiB, 1 hits)
You do not have permission to download this file.

WEB Kit (1.5 MiB, 0 hits)
You do not have permission to download this file.

The time has finally come. With “La Vie Electronique Vol. 16” we have reached the final volume of our grand series. (LVE 1 – 4 were released on SPV – LVE 5 – 16 on MIG-Music)
LVE 16 will be released in a digistack with 5 firmly filled CDs and a total of 385 minutes of Klaus Schulze.

“Vol. 16” is not a “Best of….” Album but also not a “The Rest of…..” as the material on these 5 CDs is extremely remarkable. Even if some tracks may have rather historical importance, due to the fact that the recordings partially were not in best shape, Schulze’s work always stays fascinating.

On these 5 final CDs we were able to accommodate what we could not – due to technical reasons and/or what would contradict the chronological aspect of the series — do on the 45 previous CDs.