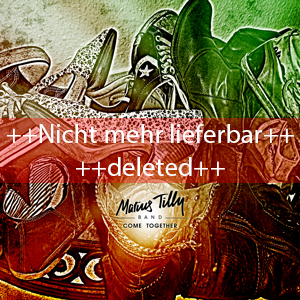 PRINT Cover (3.5 MiB, 0 hits)
You do not have permission to download this file.

PRINT Kit (20.7 MiB, 1 hits)
You do not have permission to download this file.

Marius Tilly and his band stand for blues rock of the new kind: rich guitar riffs, chasing beats and a voice that transports the spirit of the songs easily. Song writer Marius Tilly has just what modern Blues Rock needs: mixing fresh new ideas with retro sound, which reminds you of the great 60s and 70s heroes.
After the successful debut ‘Blues Colors Red Lights’ the second album ‘Come Together’ is now released. With Benjamin Oppermann (bs) and Max Wastl (dr) at his side, Marius Tilly follows his own track, which leads him to further more musical influences.

March 2014 they entered the Horus Sound Studios in Hannover together with producer Helge Preuß to start working on their second album. Just as they got started the trio already raised some attention. Eloy fronter and Horus founder Frank Bornemann (producer of Guano Apes, Die Happy, Halloween, Revolverheld, Scorpions and many more) accidently picked up some tunes of the first songs and now is publisher and mentor of the band due to his immediate amazement for them. The result is eleven songs, with which the three blues rockers finally establish themselves from the easy to fall for stereotypes of this genre.

Altough in autumn 2014 ‘Come Together’ was still far from being released, the band already became a talk about in the german music environment. Such as the band has been called “a great new promise for German blues rock” by the magazine Bluesnews. The German Blues Network agreed and without further ado sent the band to Memphis (TN) USA to represent their country in the International Blues Challenge. That is how the Marius Tilly Band became one of the very few German blues rock bands that made it across the great ocean.

In November 2014 the guys had reason for being happy about good feedback again. At the Global Battle Of The Bands the Marius Tilly Band got elected for Best Newcomer Band from Germany.
Come Together is the motto that is resembled in the lyrics of the new album as the reaction of a young musician to the not always positive changes in his generation. Although ‘Come Together’ is no concept album the theme clearly is people and their interactions. Friendship, love or even loneliness authentically flashback an insight into the world of a young man in his mid-twenties, who matured in the present, but lost his heart to the spirit of the 60s.

The eleven songs on ‘Come Together’ not only mirror the feelings of a singer though. They are also an appeal that doesn`t demand but motivate. The music is dedicated to every ambitioned concertgoer, to everyone who

loves music just as sincerely as the band members do every second. The band is eager to share these feelings with as many people as possible.
‘Come Together’ is the wish for a united awareness of life in a time of loners and coach potatoes. It is the spice of Woodstock taken to the twenty first century.