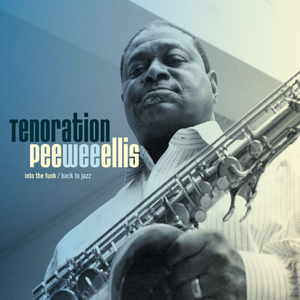 Presskit WEB (1.2 MiB, 0 hits)
You do not have permission to download this file.

PRINT Cover (1.7 MiB, 0 hits)
You do not have permission to download this file.

PEE WEE ELLIS was born to play music. He began studying piano as a young boy in Bradenton, Florida and after a family move to Lubbock, Texas he started playing clarinet and sax in Junior High, under Band Director Roy Roberts. He showed exceptional aptitude and was already a skilled musician when his family moved to Rochester, New York in 1955, after the tragic racial murder of his stepfather, Ezell Ellis. Pee Wee began performing to the public very early: at 11 he sat in on piano with the bands his stepfather booked for the local dance hall in Lubbock; and by 13 he was
playing saxophone with Dunbar High School Jazz Combo in local towns like Amarillo and also performing on clarinet with the high school marching band in State competitions. But it was in Rochester that he began gigging in earnest at the renowned Pythodd, in a scene that included Ron Carter, Chuck Mangione and Roy McCurdy.

In the summer of 1957 he studied with Sonny Rollins in New York, flying down to the city for his weekly Wednesday lesson! Pee Wee joined the James Brown Revue in 1965 and began arranging with James Brown almost right away, becoming band leader within six months. He soon began co-writing with the Godfather of Soul and Funk’s first hit Cold Sweat, was co-written with James Brown in 1967. This defines what we think of as Funk to this day and was followed by many other songs (26), including Say It Loud, I‘m Black and I‘m Proud, Mother Popcorn, Lickin‘ Stick and The Chicken (later made famous by Jaco Pastorius). Thus, Pee Wee Ellis has been called ‚ The Man Who Invented Funk‘. Using his jazz influences, he distilled R&B and wrote complex, polyrhythmic arrangements that created a dialogue with Mr. Brown‘s singing rather than simply being a backing track. Pee Wee’s effect on music was huge, leading directly to George Clinton, Sly Stone and, in a circular twist, Miles Davis’ 70’s work. Pee Wee yearned to grow beyond the confines of James Brown and left the revue in 1969 to work as arranger and musical director for CTI-Kudu records, the most popular jazz label of the 70’s. He was MD and Arranger for Esther Phillips and worked with other CTI artists George Benson, Hank Crawford, Johnny Hammond, Sonny Stitt and Brother Jack McDuff.

In 1979 Van Morrison asked Pee Wee to write arrangements for his Into The Music album, leading to Pee Wee becoming Van’s musical director for the next few years. Pee Wee collaborated on several of Van’s finest albums including Common One, Beautiful Vision and A Sense Of Wonder, and also led a fine stage band which produced some of Van’s greatest live performances. He stopped working with Van around 1987 but in 1992, coinciding with a new surge in popularity for Van, Pee Wee returned as horn arranger for the critically and commercially acclaimed cd‘s Days Like This, How Long Has This Been Going On? and Back On Top. In between his work with Van Morrison, Pee Wee reunited with Fred Wesley and Maceo Parker and they made several albums and toured extensively as both The JB Horns and Maceo Parker‘s Roots Revisited project. Throughout the 1990’s, whilst continuing to tour, Pee Wee released several solo albums on Minor Music that truly illustrate the depth of his music. The first of these cd‘s Twelve and More Blues (a jazz trio album) was chosen by the New York Times as one of the 10 Best Jazz Albums of 1993.

Since the Millennium, Pee Wee has released Live ‘n Funky, a brilliant live set, recorded in New York; Ridin’ Mighty High, a gospel album that has been his biggest hit yet, and his last project for Skip records Different Rooms, a new genre for the new millennium: smooth funk, nicknamed ‘SMUNK’. In 2005 he visited Japan with the Cuban pianist Omar Sosa to great acclaim and in 2006 they performed together again in South Africa followed by a sell-out week at Yoshi‘s in Oakland. More recently he has performed with, and arranged for, the Miami-based Spam All Stars with whom he also performs live. Pee Wee and his own band, The Pee Wee Ellis Assembly, regularly tours the UK and Europe. He also continues to work in the education field and, as always, produces and arranges. During this period of varied work Pee Wee had found World Music, or it found him! He wrote horn arrangements for Malian singer Oumou Sangare’s album Worotan, and also for Senegalese singer Cheikh Lo – the result being Lampfall a brilliant and natural fusion that caught the attention of many. This led to arranging and playing for two Cuban legends: Cachaito Lopez and Miguel ‘Anga’ Diaz. Pee Wee continues to arrange for World Circuit Records, including working with Ali Farka Touré on what sadly turned out to be his last album, and Oumou Sangare’s latest album: Seya.

In 2008 Pee Wee led a new project ‚Still Black Still Proud – An African Tribute to James Brown‘ with his long-time colleague Fred Wesley, and Cheikh Lo. Other guests in the show included Vieux Farka Toure (Mali), Tony Allen (Nigeria/Europe) and Angelique Kidjo. They took the show to the UK, Europe and North America and played to sell-out audiences and rave reviews. ‚Still Black, Still Proud‘ have upcoming shows in America in the summer and fall of 2011. Pee Wee’s  album TENORATION, produced with Joachim Becker for “Art Of Groove” is  a dynamic, eclectic mix of jazz and funk is stamped with Pee Wee’s own individual style and the album has a vibrant ‘live’ feel. Very exciting!