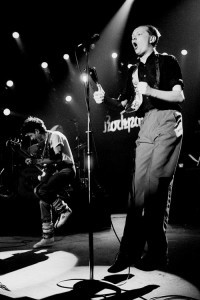 In March he was on tour again and also with his go to bassist Graham Maby at his side. JOE JACKSON who is living primarily in Berlin these days, on stage is an entertainer extraordinaire at all times. Like a fan says: “He is always good for surprises, enjoys performing and shows it because he always captivates the audience.”

Meanwhile he is in the business for 40 years now and moves between many different genres masterfully. For all the people who could not catch a show in March, only just found out about him or maybe were even there in the Markthalle Hamburg,back then, we got you covered with this Rockpalast release.

We have one version as a 2-DVD + 2-CD bundle and another as a double album with a classic gatefold cover. Sigh, how beautiful it is to take a vinyl out of the sleeve and put it on the turntable. We had to capture this moment.

And as a treat for you, here is a clip with Mister JOE JACKSON live at Rockpalast.