Patricia Vonne – Presents her new album “Top Of The Mountain” 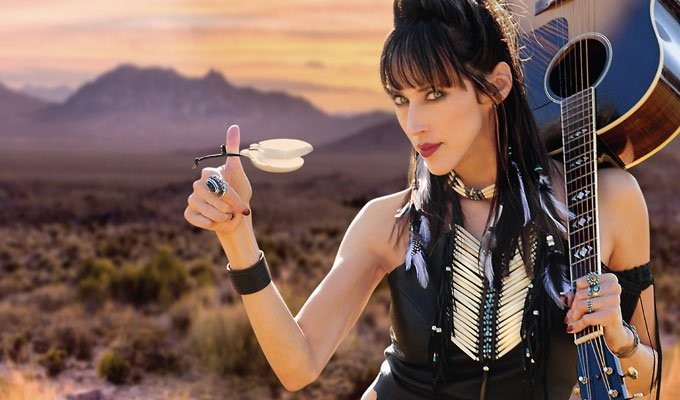 With the release of her seventh album, Top of the Mountain (street date March 23, 2018), Patricia Vonne takes her musical career to a new level.

Following on the heels of her acclaimed all-Spanish album, 2015’s Viva Bandolera (which made the Top Eight list in the Huffington Post), Vonne’s new effort incorporates all the multi-faceted components that define her unique musical persona; rock, folk, flamenco, bilingual Tex-Mex and Latin strands that, taken together, form a rich and colorful tapestry.

“I’m a ninth-generation Tejana,” says the San Antonio native and Austin resident, “a fusion of many cultures and musical influences.” Asked to describe her music to a stranger she replies, “I call it roots rock with a south-of-the border flavor. It’s always been important to me to embrace my Latin heritage through my music.”

The defiant, stand-your-ground title track sets a declamatory tone as the rest of the album winds a sinuous path through the border radio groove of “Lil’ Lobo,” the careening rocker “Graceland Trip”, “Madre de Perla,” a flamenco-flavored tribute to Vonne’s mother, the spaghetti western soundtrack that is “Western Blood,” and much more.

As co-producer Michael Ramos explains, “From a production standpoint, I wanted to bring the tunes to a place that respected Patricia’s previous work, yet would allow the listener to hear Patricia’s Spanish roots in a new way. In ‘Wedding Song,’ which is the most traditional song she’s ever done, I wanted to recall the golden era of Latina singers and styles, and artists such as Lydia Mendoza.”

Rick Castillo adds, “For this album, I feel Patrica used wider sonic landscapes than before. The album is both vulnerable and playful at the same time. I wanted to approach the rock songs with more attitude and grit than what she had done before, and I also encourage her to dig deeper vocally.”

San Antonio, Texas, has always been a musical cauldron, a “cultural menudo” as one writer put it. It’s a city big and diverse enough to embrace the West Side border groove of the Sir Douglas Quintet, the puro conjunto of Flaco and Santiago Jimenez, the blues of Robert Johnson (he recorded part of his seminal catalog in the downtown Gunter Hotel), jazz, country (SA’s Johnny Bush penned Willie Nelson’s theme song, “Whiskey River”), as well as rock, folk, punk, Tejano, metal and more.

A product of that South Texas fusion, Vonne is nonetheless unique. From the tip of her castanet-snapping fingers to the toes of her hand-tooled cowboy boots, Patricia Vonne is a one-of-a kind Tex-Mex original.

Top of the Mountain was born of challenges, she says. “I had a very tumultuous year—extreme highs and health-draining lows. As always, it was music that pulled me through it, gave me strength and brought me peace. Top of the Mountain is the start of a new chapter. I’ve made it through the dark valley and the view is spectacular.”