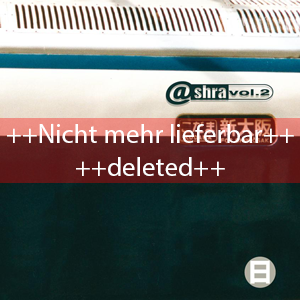 Recorded during the first Japanese tour of the band in Osaka and Tokyo in February 1997, this double album is a rare document of the late Ashra  with Manuel Göttsching, Lutz Ulbrich, Harald Grosskopf with the new signing Steve Baltes, who has since been in Goettsching’s band .
A perfectly oiled blend of ambient, techno and innovative beats was presented to the enthusiastic  Japanese audience,   determined by the wonderful, mutually looping guitar playing from Goettsching and Ulbrich, and the powerfully rhythmic interplay of Grosskopf and Baltes.
The program includes new interpretations of old pieces and new compositions. “@ shra” was released in 1998  after the concert as a single CD. “@ shra Volume 2″ was released with additional concert footage . by popular demand  in 2002.
Now both are on a double album and combines worldwide