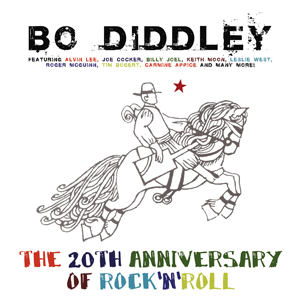 Born as Ellas Otha Bates (later as Ellas McDaniel due to his adoption) in 1928, Bo Diddley learned how to play violin at an early age. He received his first guitar at the age of 12.

Upon his first involvements with the 708 club in Chicago, he created a sensation in 1951 through his own style and his self-made equipment: a tremolo made from an old clock and auto parts. His self-made guitar with a rectangular body out of Bakelite would eventually become his trademark.

In 1956 Bo Diddley received his first record deal from Chess Records for a single with the titles “Bo Diddley” and “I’m A Man.” Willie Dixon also appeared on this single.

In the years that followed Bo Diddley was always to be heard on the charts (in 1960 with the single “Roadrunner) and developed into a versatile musician. In 1962 he had his last hit “You Can’t Judge a Book By the Cover” (Willie Dixon) for the time being. Always recurring in his songs is the so-called “Bo Diddley Beat”, often called “Salesman’s Knock” as it resembled the way the salesmen would knock door-to-door.

Bo Diddley’s influence has remained the same from the 70s through the very present. Even musicians from the punk and new wave scene have reverted back to using his songs.

The bonus tracks date back to a 21.Februar 1984 Radio Bremen „Bo Diddley & Mainsqueeze“ concert at the Schauburg.