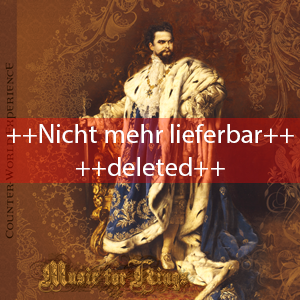 Re-release of the fourth studio album “Music for Kings” by the Jazz Metal band Counter-World Experience.

After the success of „Metronomicon“, which more than ever presented Counter-World Experience as one of the most technically accomplished bands dedicated to Progressive Metal, comes what may be termed the logical next step. On their fourth studio album „Music for Kings“, the band demonstrates better than ever their talent at combining powerful Staccato-Riffs and extravagant solo musings with electronic sound textures and listener-friendly melodies.

2012 sees Counter-World Experience creating more material utilizing the band members“ shared roots in classical music. Both guitarist Benjamin Schwenen and drummer Thorsten Harnitz have classical studies on their resumes. This formative element is immediately apparent with the band’s first work for solo organ („Overture – The Coronation“), and also – another first for the band – in a guest appearance by opera singers in the piece „Trois filles du roi“.

Making sure the band doesn’t lose its ties to the jazz world is bassist Sebastian Hoffmann, who through his playing ranks as one of the finest musicians in the German Jazz scene.  His improvisatory solos, combined with his fluid basslines, act much as a counterweight to the classic through-composed music of the band.

As per the band’s previous studio album, “Metronomicon“, the production values on this CD cannot be underestimated or underappreciated: recorded at Afterburn Studio Berlin and mastered at the renowned Studio Pauler Acoustics, the production brings the songs the necessary balance between power, transparency and depth. In addition, „Music for Kings“ benefits from clever graphic design and thorough booklet notes.