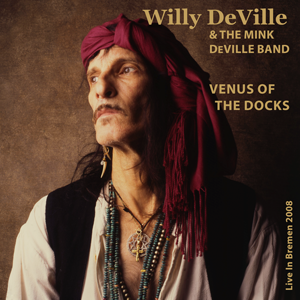 At the time of this live recording, February, 2008, Willy DeVille was clean and sober, and had been for a few years, yet he still seems delightfully deranged, screaming and squawking between songs, still emitting a strange voodoo attraction that seems to channel James Brown (minus the overblown theatrics), Dr. John and Tom Waits, despite DeVille unkindly describing Waits thus in 2007: “He’s a friend of mine but I’ve never really listened to him. He always sounds like he’s goofing. You remember Emmett Kelly, the tramp clown who wore the top hat? He kind of reminds me of him in a funny way. He’s the funny drunk at the end of the bar.”

But when Willy sings ‘Try stealing a guitar that’s strung with barbed wire, Ripping them strings like your fingers’ on fire’, on his own ‘Muddy Waters Rose Out Of The Mississippi Mud’ you instinctively feel his connection to the blues, the South, to the old, weird Antebellum America, and even earlier before Manifest Destiny masquerading as Lady Liberty stole the Mexican land and incorporated it into the growing United States. Despite being raised in New York this is his America. It’s all there to hear, too, in ‘Spanish Stroll’, ‘Chieva’, and ‘Demasiado Corazon’. At his heart he’s still the entertainer, the showman, the raconteur, the musician and with exhilarating, thrilling and powerfully individualistic covers of ‘Trouble In Mind’, ‘Heartbreak Hotel’ and ‘Hey Joe!’, it feels like he’s speaking from personal experience each and every time.

Sadly, around a year later in February 2009, Willy was diagnosed with Hepatitis C, and later that year (May) while he was being treated for that illness his doctors discovered he was also suffering from pancreatic cancer. Willy DeVille departed this mortal coil in the later hours of August 6th 2009, a mere three weeks short of what would have been his fifty-ninth birthday.

Willy DeVille was always the rebel, still refusing to conform, still the individual, as this album demonstrates. Enjoy the wonderful legacy he left behind and rejoice in this latest, previously unreleased live collection from February 2008. And despite, unknowingly, perhaps already suffering from the cancer that would eventually claim him, Willy was always a performer able and willing to offer a memorable show.