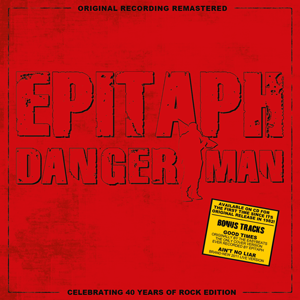 Back in 1981 all was not well in Graue. The strange old green painted schoolhouse where the band was living was a bed of conflict. They say that you can choose your friends but not your family, and EPITAPH was like a family. You may sometimes do a runner, but somehow you always belong and you mostly end up coming back at some stage. But right now this was definitely meltdown.
Cliff Jackson decided to go back to Dortmund, or basically anywhere not painted green and in the middle of nowhere. Fritz Randow was negotiating a return to his old band Eloy, and did a studio album with them. Eloy was Hannover-based, so he stayed on in the house with Heinz Glass, who was working on a solo album.

Back in Dortmund, Cliff decided it was time to get the American tour line-up back together, comprised of himself, Bernd Kolbe, Klaus Walz and Norbert Panza Lehmann. Lehmann had left about three years earlier, heading for Hamburg to swing the sticks for Rudolf Rock und die Schocker, while Bernie Kolbe and Klaus Walz landed in Berlin to begin what seemed to be a never-ending tour with Karthago. Their sojourn with Karthago ended amicably and they also headed for Hamburg, where they played a while with Jutta Weinhold, who had formerly been a background singer with German rock-legend Udo Lindenberg. Bernie recollects that her father was a wine grower, so there was always a good drop of wine to be had.

Then one day came the phone call from Cliff, and everyone made their way back to Dortmund, the city where the EPITAPH story had begun. Bernie brought some good songs back from Hamburg, and Cliff had a few on the back burner, so everything was looking rosy – except for the thing with Klaus’ legs.

Klaus had been loading his gear into the boot of his car when another driver drove straight into him. Two pieces of German autotechnik with Klaus inbetween meant he was not likely to be dancing on any tables for a while, and Bernie still expresses his amazement at how Klaus coped with what really was a very nasty injury. Despite being on crutches for months, Klaus continued rehearsing, albeit seated.

Around this time, Bernie was at a concert in the famous Dortmund Westfalenhalle when he had a chance meeting with Klaus Goik, a promoter and manager who had his offices there. Cliff never was quite sure what his official connection with the Westfalenhalle was, but he had been involved in gigs by bands like Foreigner, Michael Jackson and the Rolling Stones – and he had some very smart offices. When Klaus Goik said he’d like to take them under his wing and manage them, it seemed like a very good offer.

Because of the success of the previous EPITAPH line-up, the band still had good connections with promoters in the south of Germany, a network of people who were more than happy to give them gigs. The communication between them and the new manager was not quite what one might have hoped for, but the Goik did at least come up with a record deal, with a small company called Rockport Records.

This was around the time that the Neue Deutsche Welle was peaking, with bands like Extrabreit and Nena and the like, which meant that EPITAPH wasn’t getting all that much live work. So the record deal came at just the right time, and EPITAPH was duly booked into a studio in Hiltpoltstein, a small rural settlement about 30 kilometres from Nuremberg. It was one of those places where all the street lighting goes out at midnight, making a late return to the hotel a dangerous adventure. Everyone was particularly worried about Klaus, who was only just recovering from his injuries, and had great difficulty feeling his way along the

kerbside. But once back in the hotel in one piece, they were welcomed by the biggest, thickest eiderdowns imaginable, and radiators that were impossible to turn down, and a wooden crucifix above each bed.

Although it was a pleasant place in a bucolic kind of way, it was not very inspiring for a rock band. But EPITAPH was well used to difficult conditions, and Bernie recalls that although the sound engineer was not quite the calibre they had hoped for, he did his very best, and the band had enough experience to help him put together what they felt, although only thirty four minutes long, was a pretty good album – apart from the thing with the cover.

That’s always the problem: the record company always has the last word when it comes to the cover design, and Rockport knew that EPITAPH was not Neue Deutsche Welle so they must have figured rock equals leather jackets and knuckle-dusters. Not exactly the image that either EPITAPH or its fans had of the band.

After their return from the recording studio, Goik arranged a few gigs for the band, including a small tour with ZZ Top and Joan Jett and the Blackhearts. When they did the Würzburg Kickers Stadion and had the dressing room next to ZZ Top, Cliff got a visit from one of the ZZ Top roadies who enthused that “you guys are really good, you should come on tour with us in the States and play backstage – there’s always 300 people there!” Considering that EPITAPH weren’t actually getting paid for these gigs, organised by Mama Concerts, they went down well with the audiences.

Cliff remembers coming off stage one time to be taken aside by Mama Concerts boss Marcel Avram, who was so pleased that he gave them a thousand (Deutsch)marks, which was quite a lot in those days. The band’s joy was dampened somewhat when Avram added that it was no big deal because he’d spend more on a visit to a brothel.

The Goik started having problems getting bookings for EPITAPH, complaining that it was easier to arrange a Michael Jackson gig. As it turned out, he was soon to be spared the bother. Needing to get some (non- EPITAPH) posters put up in the Sauerland region of Westphalia, the Goik needed a bus and some billposters. He phoned the EPITAPH road crew, who made place for the posters and paste by depositing all the band equipment in a storage room at the Westfalenhalle. On their return they found that person or persons unknown had ripped of all the gear. “That basically put the bollocks on that”, says Cliff, “so we decided to call it a day.”

So DANGER MAN went down in history as the last album recorded by the old EPITAPH. Being recorded by the original American tour line-up, the album has a very American edge to it. The old krautrock elements had been replaced by some medium-heavy US-style rock.

After various adventures with Kingdom and Domain, and work with other bands, EPITAPH got back together in 2000.

This album features two bonus tracks, Good Times and a live version of Ain’t No Liar. Good Times is the only cover version recorded by EPITAPH. Originally by the Australian band The Easybeats, whose songwriter and rhythm guitarist George Young is the big brother of AC/DC’s Angus Young, the EPITAPH version was recorded and mixed in a single day at the Hermes Studios in Kamen. Given a heavy rock arrangement, this version of Good Times features Ralf Bloch on drums. The tape was lost, but after being discovered in an attic in Dortmund in 2000, it was remastered by Cliff and Roger Wahlmann.

The other bonus track is a live version of Ain’t No Liar recorded at the Musiktheater Piano in Dortmund on 19 November 2011. This funky, reworked version of the EPITAPH concert favourite includes part of Long Live The Children, just to show that EPITAPH is still alive and kicking after 40 years on the road.