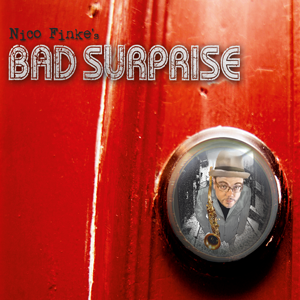 “Bad Surprise“ is to be understood in the best musical sense. Nico Finke has gathered an absolute top-class group of musicians who understand how to awaken complex compositions of life without losing their own personal touch.

His acoustic tracks aside, which rather resemble a traditional jazz quintet, the essence of this production clearly lies in the groove genre. The band has managed to give the varied compositions a common theme and connect the different musical influences at the highest level.

“I grew up in the 90s and was obsessed with music for as long as I could remember. I discovered jazz later on.” (Nico Finke)

One can recognize the funk, soul, hip hop and dubstep influences in his compositions, although they do not sound forced. The compositional variety with funk, soul, hip hop or dubstep influences shine through an elegant and lovely arrangement full of rich ideas and playfulness. The mastermind’s personal touch is unmistakeable and imprints its stamp on the entire production from the mix to the artwork, which for a debut album is extremely impressive.

The entertaining and varying album grabs the listen and takes him on a trip through beats, sounds, and tones which does not only speak to jazz fans, but even reach party foxes and electronic fans. This album should be the spring board taking care of many “bad surprises” in the future.

With the Hannover-based label Art of Groove, the jazz divistion of MIG-Music GmbH, Nico Finke’s Bad Surprise was able to find the perfect partner. Other artists under this label include Snarky Puppy, Pee Wee Ellis, Trilok Gurtu and Vince Mendoza.

The quality of this debut album leaves no doubts that Art of Groove next to its established Artists and highly-valued rereleases, can also provide for young and fresh newcomer projects.

Nico Finke – Saxophone, Clarinet, Flute, Loops
Since ending his studies with Matthias Schubert, Michael Moore, Don Braden and Mark Gross in Germany and The Netherlands, the band leader of Bad Surprise has lived in Hannover. He has toured through Europe and the USA as a sideman and has accompanied soul and funk legends such as Marva Whitney, Martha High and Ann Sexton. Nico Finke won as a saxophonist among others the “Future Sounds Award” at the Leverkusener Jazztage and was a finalist of the Composition Contest of HR Bigband

Gary Winters – Trumpet, Flugelhorn
The credit list of trumpeters from Kentuky can be read as the “who is who” of international jazz, soul and funk history. He toured through America, Australia, Europe and Asia with artists such as Lionel Hampton, Maria Schneider, Manhattan Transfer, The Temptations and Lenny Kravitz, just to name a few. He is currenly a permanent band member of Fred Wesley & The New J.B.‘s, as well as Bootsie Collins Funk Unit and is a highly sought sideman and arranger for many productions.

Roman Rofalski – Piano, Rhodes, Wurlitzer, Synths
Back from New York, the Berlin-based pianist provided his services for Bad Surprise. He finished his studies with Kenny Wheeler and David Berkman at the renowned New York University and has released his first production as a leader. As a pianist he is one of the few top pianists who play in both the classical and jazz sector.

Klaus Spencker – Guitars
Ostfriesland Bad Surprise guitarrist has had a part as a leader in various productions. Next to the Klaus Spencker Trio with Marc Muellbauer and Heinrich Köbberling he also has his own project called Van Tied To Teid. He took the part of playing harmony instruments and was the perfect addition for the multi-faceted compositions on Bad Surprise.

Michael Gudenkauf – E-Bass, Upright Bass
The Bad Surprise bassist lives in Hannover and is a highly sought side man for a few project which have been in focus recently. With Malte Schiller’s Red Balloon he has won among others, the European Jazz Talent Award. Next to diverse workships with McBride, Dennis Irwin, Matt Penman etc., he studied under Detlev Beier and Martin Wind. He is present in all its facets with this production on both electric and upright bass.

Kristijan Krajncan – Drums
Bad Surprise drummer was born in Slovania and has lived in Amsterdam for many years where he completed his master studies in film composing in 2013. Prior to this he studied percussion at the am Prins Claus Conservatory in Groningen/NL under the instruction of Ralph Peterson and Owen Hart Jr., where he also met Nico Finke. His musical qualities have already been rewarded with various prices. In 2012 he was the half-finalist of the Thelenious Monk Competition.

Nene Vasquez – Percussion
Venezuelan Grammy Award Winner and Percussion Superstar supported this production with his technical and musical abilities. As a highly sought studio musicians he has had the opportunity to work with musicians such as Shakira, Celia Cruz, Cheo Feliciano, Tania Maria, Colombia All Stars, Roger Cicero, HR BigBand, 4Hero and many others.