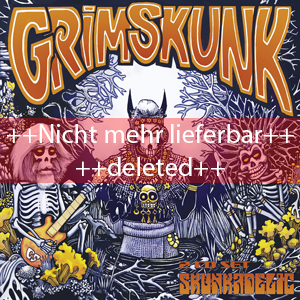 GRIMSKUNK are a Canadian band that already exists since 1988 and have released more than 7 albums that made them heroes not only in their home country
After 20 years as one of Canada’s most enduring and respected rock bands, GRIMSKUNK has put together a collection of songs from their previous seven albums into a fabulous double CD release, titled “Skunkadelic”, for fans and collectors alike, complete with new artwork by their main artist Benoit Robitaille!
Featuring both fan favorites and a few lesser known tracks, as well as cool new artwork, this should be a treat for GRIMSKUNK heads around the world!

The album will be released in April 2011, accompanied by a series of tour dates in Canada before GRIMSKUNK head off to Europe to tour with their good friends and legendary psychedelic metal band Voivod!