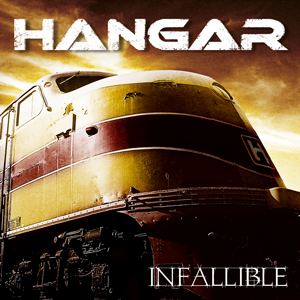 The Brazilian band HANGAR was formed in 1997 with the initial aim of playing covers of some of the bands all the members liked. In 1998, the band recorded their first album “Last Time”.

In 2001 HANGAR’s drummer joined Angra and recorded three studio albums, one EP and a live album with the band, besides having done three world tours.

In August 2001, the successor to “Last Time” was released: “Inside Your Soul”. Aquiles Priester returned to HANGAR.

During 2006 and early 2007 HANGAR recorded a new studio album, “The Reason Of Your Conviction”, mixed by Tommy Newton at Area 51 Recording Studio near Hannover, Germany.

This album marks the beginning of a new phase in HANGAR´s career and was released in Europe, Japan and South America.

After two years of intensive touring, HANGAR changed their singer and went back into the studio to record with Humberto Sobrinho on vocals their brand new album “Infallible”. Once again, Tommy Newton was behind the mixing desk.