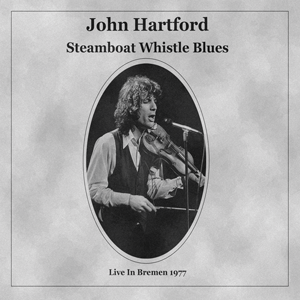 In 1967 Mike Clarke and David Crosby had left the Byrds; only Roger McGuinn and Chris Hillman remained. Hillman, a country music aficionado, brought Gram Parsons to the Byrds and the three decided to record an album about American musical history, based on hillbilly, country and bluegrass. They rented a studio in Nashville and hired local musicians, including John Hartford and Clarence White. Directed by producer Pete Asher, the Byrds recorded the album “Sweetheart Of The Rodeo”. John Hartford’s influence as guitarist and banjo player on this production has been considered enormous. The album is seen as a milestone in rock history, it was the birth of the new genre country rock, nowadays also called Americana. Without this album, future successes of bands like the Flying Burrito Brothers, Poco and the Eagles, or artists like Jackson Browne and Alison Krauss would have been unthinkable.

But there was no room in John Hartford’s life to submit himself artistically to a band structure. He preferred to record solo albums and toured with them worldwide. In the same year that saw the release of “Sweetheart Of The Rodeo”, the American country star Glen Campbell covered the John Hartford composition “Gentle On My Mind”. The song conquered the world in the Campbell version and earned Hartford two Grammys in that same year. In the following years/decades artists like Aretha Franklin, Frank Sinatra, Elvis Presley, but also R.E.M. and Alison Krauss covered this song.

John Hartford once said: “The success with “Gentle On My Mind” brought me my freedom”.

Which allowed him to fulfill a dream, working several years as helmsman on a paddle steamer on his beloved Mississippi.

In February 1977, during one of his rare tours of Europe, John Hartford also had a gig in Bremen, which was recorded by Radio Bremen. A great recording, entertaining, exciting, multifarious. Hartford takes his listeners on an acoustic journey through the varied and rich American musical history.

Many years later, in 2000, shortly before his death, John Hartford topped his extraordinary life’s work once again with contributions to the soundtrack of the Mississippi odyssey “O Brother, Where Art Thou?” by the Coen Brothers, starring George Clooney. In 2001 he received another Grammy for this work. This is a further recognition of John’s life’s work, the preservation of traditional American music to ensure it does not disappear in the short-lived mainstream, losing its significance. On June 4, 2001 John Hartford lost his fight against cancer in Nashville, Tennessee.