Lost In The City 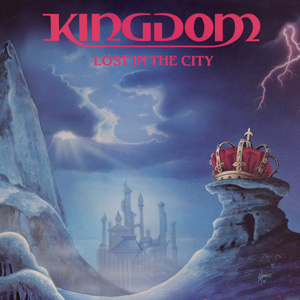 Kingdom – Lost In The City

Epitaph was the beginning of everything. Epitaph, a 70’s German progressive rock band which, during the years 1971 to 1982, had a total of 11 albums, toured worldwide, including 3 US tours. After the band split up in 1982, Cliff Jackson, lead singer, guitarist and producer, and Bernd Kolbe, lead singer and bass guitarist kept in touch and continued with their songwriting.

The band came back to life in1986 and included Mario Schramme (guitar), Volker Sassenberg (keyboards) and Freddy Dietrich (drums). The band was very productive so they got in touch with Frank Bornemann, the owner of Horus Sound Studio in Hannover. They recorded an incredible 7 track live demo in just 3 days! A different musical direction. The band felt that the name no longer fitted, so they changed it to Kingdom.

Frank was so sure of the band’s potential that he helped to get them signed up with Markus Roeder’s Semaphore label. Kingdom’s first album “Lost in the City” was released by Teldec (East West) in 1988. It was a fascinating mixture of 80’s hard rock meeting blues and influences from the great era of British Rock, marked by such names as Led Zeppelin, King Crimson and Thin Lizzy. The album, produced by Cliff, received rave reviews from the rock press worldwide.