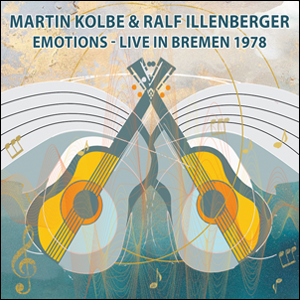 “Bremen, late autumn 1978. The stage of the students music-pub StuBu is one of the last stops on our first major German tour. In the summer we were guests of the United Jazz & Rock Ensemble on the stages of big venues in Germany, now we were able to get to know our very own audience during six weeks with almost no days off.

“You have an extremely good reputation!” These were the words of a promoter who welcomed us on our journey. It seemed to be true, because all the concerts in clubs, youth centers and smaller concert halls were well attended, some even sold out.

1978 was our first year as professional musicians. By May, our first common album, “Waves,” had been released to very favorable critical acclaim and sold very well. Of course, other appearances on radio and television, like the cultural program “Aspekte” on German TV station ZDF, also helped to make us known nationwide.

This first tour was the start to more than 1,000 concerts we gave in the course of our ten-year collaboration, which took us to about 40 countries, some of them very exotic. With so many performances, many things get lost in the whirlpool of events and some things are forgotten. That’s why we didn’t even realize that the Bremen concert was recorded at that time and broadcast by German TV and radio station Radio Bremen. We were all the more amazed when the MiG label dug up this recording and offered it to us for release on CD.

Not only loyal fans might be surprised by some of the tracks on this CD, because they have never been released before – also for ourselves there were a few new or rediscovered ones. We still dimly remembered our versions of “I Shot The Sheriff” and “These Boots Are Made For Walking”, but “Gentle Steps” we didn’t have on our screen at all. Actually, it’s amazing that this song never made it onto a record! All the nicer is now this unexpected discovery.