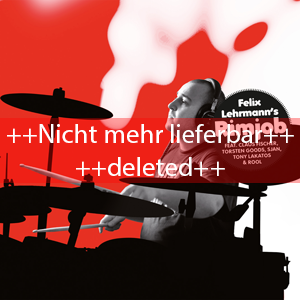 Happiness has a name: „Felix“ means „the happy one“ in Latin. And what else could make a musician happier than the release of his first solo album? Even more so when the debut is a matter close to his heart that presents a talented artist who shines with a profound virtuosity, multilayered compositions and intuitive interaction. In times of the ubiquitous casting craze it is a pleasant experience to enjoy „real“ music – handmade, lived and felt – like Lehrmann‘s debut called „Rimjob“.

For so long, friends and colleagues have kept asking Felix M. Lehrmann when he was going to record an album of his own. „I have been dreaming to fulfill my heart‘s desire for years. It is eight years now that I have been a service provider“, he remembers. „It was time that something like this happened.“ Within these eight years Felix M. Lehrmann (the letter „M“ stands for Michael and not „Mohammed“ like a prankster recently claimed on Wikipedia) acquired the reputation of being Germany‘s most talented drummer.

A storybook career: Born in 1984 Felix M. Lehrmann is barely able to look across the bass drum at his first encounter with a drum set. At the age of four he tries to work his uncle‘s drum set, at seven he receives serious lessons. Then a concert changes his life deeply: He is eleven years old when he hears Paco Séry, a drummer who played with Joe Zawinul and Salif Keita, at this moment Lehrmann‘s career as a musician begins, encouraged by his father Michael who is a professional musician himself, playing guitar for the singer Veronika Fischer and in the band „Stern Meissen“.

As a teenager the groove talent who was born in Halberstadt and raised in Berlin, plays in „thousand and one bands“. Then, at 17, the knightly accolade: He is asked to accompany soul singer Della Miles on tour as a professional drummer. Today he is 26 years old and has a reputation of being one of Germany‘s most perfect drummers and a master of groove in all genres. Accordingly his engagement book is packed with jobs. Artists like Sarah Connor, Dendemann, Tobias Regner, Mike Leon Grosch, Afrob, Bell Book and Candle, Curtis Blow, Jennifer Rush, The Weather Girls, Jeanette Biedermann, Jamie Shaw und Alloe Blacc wanted his high quality beats for their studio and live performances. Let‘s not forget Lehrmann‘s side project named Rivo Drei. „With your groove you put your mark on a production as a drummer, even if it is a simple pop tune“, Lehrmann explains. He is not by chance compared to other masters of the drum like Dennis Chambers, Manu Katché, Vinnie Colaiuta and Jack DeJohnette.

But back to „Rimjob“. For some time, Felix M. Lehrmann had collected ideas and had captured first sketches with his second instrument, the piano. „I did not have finished songs but rather themes and motifs. Actually, ‚Rimjob‘ is a jam album. The guys from my band have straightened my pipe dreams and built real songs from that. Without their help this album would not sound like this.“ The guys of the band that he refers to are high-quality musicians, top-class at their instruments. The Erlangen jazz virtuoso Torsten Goods who has an outstanding reputation in the German music scene delivers a scintillating performance on guitar. The Keyboarder Till Sahm and Lehrmann are longtime friends since they met during the above mentioned tour of Della Miles.
Bass player Claus Fischer certainly is Germany‘s best known specialist for the deeper notes, and he has not only been engaged by German comedians and presenters Stefan Raab and Anke Engelke for their TV band but also had a range of studio and live jobs. „To me Claus is the uncrowned king of bass in Europe“, enthuses Lehrmann. Last but not least the saxophone players Tony Lakatos and Rool take care of the good sound of the album „Rimjob“.

In taking a closer look on the production of „Rimjob“ that was recorded in Berlin‘s Mitte Mars Studios under the direction of Matthias Millhof it is soon clear that in only four days the band has produced an exceptional album. Highly trained professionals do not need more time to come up with true musical brilliance! Of course Lehrmann‘s influences can easily be detected: jazz and rock fusion, along with memories of John Scofield, Alan Holdsworth and Pat Metheny. Hence a fine fusion track like „Homo Proll“ is not only a pun but also takes a bow to John Scofield‘s „Protocol“. „I love fusion since my dad first introduced me to jazz“, admits Lehrmann. „Since that time I totally fell in love with fusion. And that is why I invited my favorite musicians from all over Germany to record an album in this genre. I am so happy that they took part in this.“

While listening to the ten tracks of the album „Rimjob“ it also becomes clear why Lehrmann constantly gains kudos for his play in style, for power and precision, elegance and creativity. Other drummers gaze in amazement at his single stroke fills and his work with the hi-hat which he has studied with Zawinul‘s Paco Séry. His colleagues love Lehrmann‘s buoyant but at the same time forthcoming nature and producers appreciate his high professionalism. After all he is measured by his credo to this day: „I can play a track in the studio faster than someone has programmed it. „

Of course this policy also went for „Rimjob“. With its only four production days the album is a passionate pleading for spontaneity – ten „snapshots of moments“ as Lehrmann puts it. The heavy grooving tune „Red Scorpion“ for example evokes the Red Hot Chili Peppers, followed by the breezy grooves of „Fatieh klopft“ up to the ingenious solo spot of „Randy‘s Bum“ that shows once more Lehrmanns profound virtuosity at the drums. Again on every track we have to admire the creative and tight interaction of Lehrmann and bass player Claus Fischer – especially in a tune named „Patting“.

„Rimjob“ is an album where the music has priority – genuinely, authentically and live. „Bass and drums have never been cut – in none of the tracks“, Lehrmann explains. „There are only a few guitar and keyboard overdubs, a fact that I am very proud of.“ The album title has been chosen by the bandleader with a wink. „The ambiguity of ‚rimjob‘ (describing a sexual technique) and ‚rimshot‘ (describing a drum technique) is purely intentional“, he says with a smirk. „When men are brainstorming they come out with peculiar titles.“

„Rimjob“ is an album that will certainly fascinate drummers but it is nonetheless addressing music lovers in general. „It may not be the typical album for someone who plays the drums but I hope that drummers will like it“, Lehrmann wishes. The TAMA drums endorser also is a popular workshop teacher at Drumtrainer Berlin (www.drumtrainerberlin.de) where he gives advice and support to drum students on their path to become a professional musician.

„Road dog“, studio musician, teacher or solo artist -in all those roles there is one thing that matters most to the likeable citizen of Berlin: „to be authentic and relaxed. Be the one who I am. You must not hide your influences but you also must not desperately try to sound like somebody else. I hope that I succeeded to present a snapshot of my musical state.“ And when a grandmaster of drums like Wolfgang Haffner is raving in his liner notes of „Rimjob“ about „great songs, phantastic music and so much fun“ and praises Felix M. Lehrmann as „an idol for countless drummers all over the world“, his words are as precise as Lehrmann‘s hits on the drums. „Rimjob“ is a vision that came true of a young exceptional
musician who is on his way.
Lehrmann invites his fans to go a few steps with him and come and see „Rimjob“ live. A tour is being planned for next year. „This album is my baby after all!“ says the man with the notorious basecap happily. Recap: „Felix“ meant „the happy one“. And with the impressive album „Rimjob“ he accomplishes to make not only himself but also his fans happy.