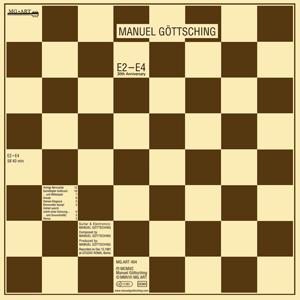 Without any doubt it was Manuel Göttsching with his band Ash Ra Tempel that were responsible for the label ‘Berliner Schule’  which later became  ‘electronic avantgarde’.
With his follow-up band  Ashra,  he defined a new symbiosis of guitars and electronics.
In 1984 it was the magnificent “E2-E4” – named after the most popular opening move in a game of chess – with whom he delivered an epoch-making masterpiece of music.
“E2 – E4” is a  dramatic composition and interpretation, the album even has been compared to resemble an 80’s version of Ravel’s ‘Bolero: Simplistic and delicate, turning around itself by extending itself into an one hour long masterpiece
Long before Techno and Trance simply became an empty phrase, Göttsching has celebrated the pure essence of this music in many different variations years ahead of their time.
A re-release to coincide the 30st anniversary will present the original “E2-E4” LP artwork.