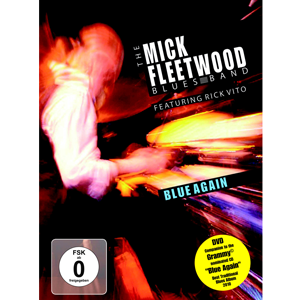 In 2007 – on time for Fleetwood Mac’s 40th band anniversary – MICK FLEETWOOD decided to erect a monument to the group and its founder members and revive the sound which was characteristic of the band’s early years.

Rick Vito and MICK FLEETWOOD have been friends for years. FLEETWOOD had first enlisted Vito’s services as a replacement for Lindsey Buckingham in 1987 after the recordings of the Fleetwood Mac album, “Tango In The Night”. Rick Vito had been a Fleetwood Mac fan since they first started. As a teenager, he had seen a concert by MICK and Peter Green – and it was first and foremost Peter Green’s guitar style which impressed and influenced him. So it seemed to suggest itself to sign up Rick Vito as guitarist to join The MICK FLEETWOOD BLUES BAND, as there are few musicians who know how to celebrate the original Peter Green sound as authentically, imaginatively and dynamically as he does.

The MICK FLEETWOOD BLUES BAND album, “Blue Again” was nominated for the Grammy 2010 in the category “Best traditional Blues-Album”.

This DVD is the companion to this album and contains breath- taking versions of early classics such as “Oh Well”, “Albatross”, and “Rattlesnake Shake”.

A vibrant, historic document of a captivating performance – not only for all fans of Fleetwood Mac and blues.