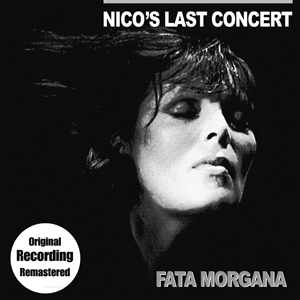 A stunning album. The last concert of this exceptional artist, shortly before she died tragically
NICO came to world through her collaborations with VELVET UNDERGROUND, ANDY WARHOL, BRIAN ENO.
She was a singer, model and actress (she starred in Federico Fellini’s masterpiece LA DOLCE VITA ).
The experimental and dismal sound of her albums is considered the forerunner of the later GOTHIC sounds and influenced many famous musicians such as IAN CURTIS of JOY DIVISION, BAUHAUS PETE MURPHY and more.

fata morgana – desertsounds in the Planetarium
in 1987 martina marx and i had the idea to organize ‘fata morgana – desertsounds in the Planetarium’ for the festival year ‘berlin – kulturstadt europas 1988′.
we at once thought of nico, who i had known for years since we had worked and lived together in the 70s. she had often told me how impressed she had been by the death valley, where she hung out with jim morisson and where she had been working on the film ‘la cicatrice interieure’ by philippe garrel, which they filmed at locations like death valley, iceland and the sahara, a picture of which you can see on the cover of ‘desertshore’. when i called her in manchester to ask her to compose “music for a desert”, she spontaneously proposed the stone desert of the moon äs a theme. it was obvious, that her magical aura would enable her to turn the whole planetarium into a moon desert and become the highlight of the festival.
nico arrived on the 4th of june together with her musicians the faction and during the two days of rehearsal every listener became enthousiastic about the creative, dynamic and intense way in which nico & the faction were working. dr. werner celnic, director of the planetarium, who operated the optical effects and who completed the music with wonderful pictures and films of the moon, seemed to be in his element. to add to this we had installed 360 sound System which created a unique sound event.

the 6.6.88 nico gave a magnificent double concert in a sold out planetarium, from which this is the mix : nico’s last concert.
lutz ulbrich, the 12th of february 1994