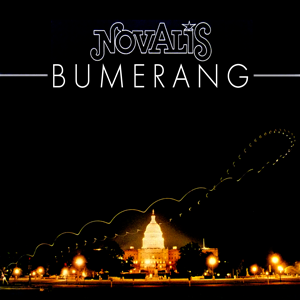 During the years 1983 and 1984 Novalis were facing the most difficult phase since their foundation. Everywhere phenomena for an upcoming breakup were to be felt. So, the “associated member”, bass player Heinz Fröhling (who had before been a guitar virtuoso with the Oldenburg progressive rock trio Schicke, Führs, Fröhling, respectively duo Führs & Fröhling) had left the quintet only after two years and two albums. In 1981 he had replaced founding member Heino Schünzel. Singer and texter Fred Mühlböck as well was thinking of leaving at that time. But at least for one collaboration, the Austrian would continue to maintain his position as the front man. For one album production Heinz Fröhling was replaced by the renowned session musician Thissy Thiers who had already been playing his robust bass for The Rattles and Randy Pie.
Come as it may: The Novalis’ flame had not yet been extinguished totally – even after a dozen years since it had started to burn. “We still had a couple of interesting ideas cooking”, keyboardist Lutz Rahn reports. And most of these went into ten tracks that were released in 1984 with the title “Bumerang”. Rahn was producer, at his side a man bearing a legendary name within the German music scene of especially the Sixties: Drafi Deutscher Junior, son of the man who became famous with the hit “Marmor, Stein und Eisen bricht”.
“Nobody will wonder that the album ‘Bumerang’ does no longer have the characteristics of Novalis’ former releases, especially the progressive ones from the very beginning”, Lutz Rahn explains. “Nevertheless there are a lot of beautiful melodies still bearing that romantic base note that made this band famous. Regarding the lyrics there no longer was an overall concept. Instead, there are up-to-date recordings that do not chum up to the current trend of the “Neue Deutsche Welle”. All in all ‘Bumerang’ is a proper Novalis affair.”
Indeed, some parts bear a resemblance to art rock authorities like Alan Parsons Project or Genesis. The wonderful solo by transverse flute in “Spazieren am Morgen“ could also have come from Camel’s mastermind Andrew Latimer instead of Mühlböck. And the soulful saxophone of “Nimm meine Hand“, also by Fred, is a class of its own. The positive impression of the production is definitely remarkable considering the difficult circumstances in which “Bumerang” was made. In fact, even though the record company would have wished to have more influence on the recording, Novalis resisited them.
Despite all these complications from the outside, “Bumerang” became a homogenous piece of pop music.
MICHAEL FUCHS-GAMBÖCK