What Are We Livin' For?
(String Commander) 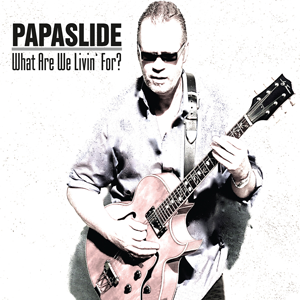 Papaslide – What Are We Livin’ For?

It might be quite difficult indeed to hide for someone who is as tall as Rune Nordvik also known as PAPASLIDE. His height of 1, 93 Meter also seems due to his ancestors, the Vikings, because Rune was born near the Norwegian harbor town of Bergen, in the province of Hordaland. Music historians from Bryggen noted February 25, 1962 as his birthday.

It was one Christmas evening 14 years later that changed Rune’s life forever: Under the huge Nordmann fir lay a six-string acoustic guitar. From that day he played nearly all the time, primarily songs of Bob Dylan and Rune’s big idol at that time, John Fogerty.

At the end of the 70’s there was only one TV channel in Norway, the state channel NRK (Norsk Rikskringkasting),  and it set the course for Rune to find his true purpose in life. It was the night of April 21, 1979. Most of Europe including Norway was watching TV. In this special night, Johnny Dawson Winter III and his collegues Jon Paris and Bobby Torello went on the stage of the Essen Grugahalle to celebrate the blues. The Grandmaster was in excellent form. He had arrived at the peak of his career and taught everyone inside the hall and everyone at home in front of the TV set a lecture on blues rock. He did not think himself too good to present songs like “Johnny B. Goode”, “Jumpin’ Jack Flash” as well as fire a medley into the audience to give them a full load of rock and Rhythm & Blues.

But when he heard “Messin’ With The Kid”, young Rune was completely overwhelmed. From this moment on he was set straight on blues – with all of its many facets. Rune bought all records of the American albino; he listened closely to Robert Johnson and dove deep into the music of Huddie “Leadbelly” Ledbetter, Muddy Waters, Willi Dixon and all the other masters of the genre. He exchanged the acoustic against an amplified guitar and created his very own cosmos.

From the very beginning, he wanted to exceed the limited area of the blues. He wanted to leave the monotonous world of three accords behind that are being repeated over and over again, the world that is also mostly inhabited by mean women that have left their men .He started to experiment, slipped other musical styles in like Swamp Rock, Country and of course Rock and elements of Texas blues.

Rune’s admiration for Johnny Winter was so enormous in these days that he had himself tattooed with a portrait of his idols on the left part of the chest.

It took another 16 years for Rune to start his first own band called “Blues For Breakfast”. The first changes in lineup were made in 1997, and after that the “Nordvik Blues Band” hit the Bergen club scene as well as other hot venues in the area around Bergen. Five years later Rune met his congenial partners: Geir Rogno on bass, the drummer Valentin Doner and the guitarist Arild Seim.

Thus was the birthday of PAPASLIDE. Within a short period of time the band had made a name as the hottest blues act of Scandinavia. After club gigs allover Norway they went on tour in the neighboring countries.

When Rune wanted he went onstage with a set of horns, keyboards and a blues and soul singer. Kim Fairchild from New York had caused a stir with her tribute to Billie Holiday entitled “All Of Me – Selected Songs By Billie Holiday”.

At one of these occasions on the road Rune Norvik came across the two time Grammy winner Roy Rodgers who was touring with Norton Buffalo (ex-Commander Cody, Steve Miller Band). The slide guitarist from California (who had amongst others produced John Lee Hooker’s masterpiece “The Healer”) reckoned the Norwegian to be a rough diamond, and during joint sessions he introduced him to the secrets and techniques of the bottleneck.

In 2009 Rune released the first self-produced album by PAPASLIDE. Especially the Scandinavian critics loved it. The Scandinavian rock radio stations played “You Can’t Hide“, and they liked the tune „Blues For Breakfast“ a lot.

“What Are We Livin’ For“, the second album, is being released in 2011. In contrast to their debut PAPASLIDE are sounding more mature, more down to earth and have intensified their rock facet. With the title track they also have a radio hit at hand. The slightly mystic and weird video by Sveim Heimvik has transferred title and atmosphere into impressive pictures.

Player
Um unsere Webseite für Sie optimal zu gestalten und fortlaufend verbessern zu können, verwenden wir Cookies. Durch die weitere Nutzung der Webseite stimmen Sie der Verwendung von Cookies zu. // We use cookies to ensure that we give you the best experience on our website. If you continue to use this site we will assume that you are happy with it.OkDatenschutzerklärung/Privacy policy