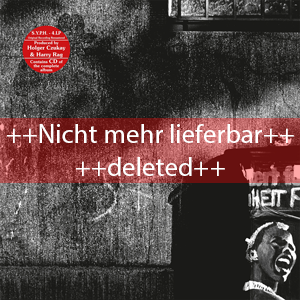 In 1976, Uwe Jahnke and I drove to Weilerswist west of Cologne, to interview the band CAN for a student newspaper, in an old cinema where they would rehearse. I was certainly more than exited when we stepped into this holy place. Here it was, the “Innerspace”, the studio par excellence. Here originated the most thrilling music in Germany, this was the location where CAN had recorded nearly all their albums, here originated the most thrilling music in Germany.
This was a secret place, a private place, a holy hall, almost a temple. Decorated with handcrafted tapestry which were softly illuminated lend a nearly oriental character to the room. Especially knowing about the importance of space in the music of CAN I felt at home at once. Here, CAN was in the air.
After that we stayed in touch with CAN and dropped by at Holger Czukay’s home studio downtown Cologne. That was during the time when when Holger was creating his key work, “Movies”. With scissors and razorblades, eight to ten huge tape recorders, a plethora of snippets full of minimal musical incidents and the intent to put the music new together again. Then Holger was in his element. For me this was the most important lesson regarding my future passion film editing, because Holger also paid attention to infinitesimal details.
Proud we played the first recordings of S.Y.P.H. to Holger again and again and we listened eagerly when he criticized them. We were well aware that we not the same league as CAN but Holger always took the time and listened to everything, we were on a friendly footing with him.
Then, one day in February 1980, we surprised him with our first album and the direct enquiry whether we could record our second album at CAN’s Innerspace studio. And whether he could be our producer and whether the whole thing could start in four weeks from then. That went well – he agreed because he was curious what we would come up with.
So we invaded “Innerspace”, a loud shrilling punk band in the private studio of CAN. We wanted to improve our style of music, to change it, to discover new territory, to form pieces out of the improvisation. We wanted to get away from the heave-ho stuff, towards something new.
Jojo played bass, Ulli played drums, Uwe played guitar and I – played everything that was around. Holger sent the signals through speakers that were spread throughout the room and recorded a number of it with several spatial microphones. Thus, most of the recordings were live; merely a few overdubs were captured separately.
What we were doing back then, we probably did not fully know. After five days the studio time was done and we drove home. Holger said that he would get in touch in six weeks and would then present our new long player. That happened in Düsseldorf, in Carmen Knoebel’s flat. Holger put a two track machine on the table and we all listened tensely. The new S.Y.P.H. album had three pieces on side one and one piece on side two. The opinions were extremely diverse. I liked the record and felt that Holger had buried himself unbelievably in the material, some edits exceeded in wit even the best of “Movies”.
I felt honored that Holger had attended to our recordings with the same love like his own. But there was also the exact opposite opinion. The album was too dainty, that it no longer sounds like S.Y.P.H.; the album could not be released like this. The band would not be able to reproduce this live. The long and heated evening ended in a completely surprising result. Since particularly the track “Little Nemo” did apparently not “belong” to us, we agreed to give it to Holger – to get three more days in the studio in return.
A little later, in these three days we recorded all “songs” that we had in reserve, among them were several outtakes from the first album. In this way arose the “new” second album “Pst” , this time with seven tracks on side 1 and the former side 1 becoming side 2. The title “Pst” refers to the “Innerspace”; it refers to listening, to silence.
Shortly after that Holger used parts from “Little Nemo” in his piece “On The Way To The Peak Of Normal” from his second solo album. Since “Little Nemo” was still close to my heart I asked Holger for the possibility to maybe release this some time. We met and checked the complete recordings to search for more moments that were worth saving. From this, the fourth album of S.Y.P.H. evolved in 1981, when German punk was at its peak – an almost instrumental album with endlessly long pieces. By a band that actually did not exist at the time of the release. To me, all this was punk because S.Y.P.H. carried on anyway.
When I think back now, after 32 years, to the time in Weilerswist, I still keep seeing the man who is digging in his neighbor’s garden; I see the wall hangings; I see Uli’s drums spread wide; I see congas, organs, amps, guitars; Jojo on bass, hanging mics, Uwe, his girlfriend Andrea, Holger, the mixing desk, the huge 24-track-tape machine. I see the light in the studio; I feel the atmosphere. I still recall how often we argued – especially Holger and me – and how the band then stood behind Holger because I had harassed, even hurt the pure and true music with my strange ideas. As my vocal experiments often did not fit. I keep seeing and hearing all this still.
Harry Rag – May 2012