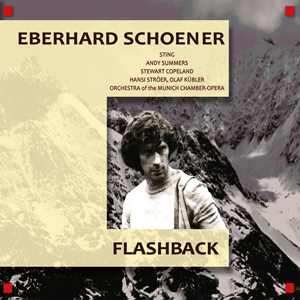 BALI-AGÚNG – TRANCE FORMATION – FLASHBACK
For many musicians who have worked with electronic music the cosmos, the space, the universe, or the galaxy have become symbols for their music. The electronic basic material (the different waveforms) obviously seems to have this relationship, but for me it is rather a clever marketing of the universe, than a real definition of the musical content.
But it interested me a planet in relation to music, a planet where both the transmitter and the receiver are in fact equally accessible: the earth.
The A-side „From the New World“ describes a journey to the USA and back to Europe, the B-side „From the Old World“ describes the Rhine from its delta to its spring.

The 3 titles of the B-side are based on music for the movie „Das Rheingold“ by Niklaus Schilling.
EBERHARD SCHOENER, Munich, (Original-Liner-Notes, March 1978)
Memories by Sting:
He is a tall man in his fifties with romantic wisps of grey hair framing an interestingly lugubrious face. His is the face of an eighteenth century aristocrat who has somehow been displaced into the twentieth.
It was Andy Summers the guitarist in The Police who had introduced us all those years ago. Andy brought Stewart Copeland and me to Munich in 1977 to work with this unusual director of classical music. Herr SCHOENER needed a band of versatile musicians to take part in a show that he was creating. We had only recently formed The Police and were desperately in need of funds to keep our unlikely dreams of stardom alive. And so a couple of weeks working in Germany as part of (as Andy described it) ‘a multi media extravaganza of lasers, circus, rock, classical and electronic music, with ballet dancers and a mime artist’ was too intriguing to turn down not to mention extremely well paid. We were on the next plane out, not quite sure what we were in for but none the less excited.
EBERHARD’s sophisticated worldliness, his old fashioned German romanticism, and his insistence that modern life could still be an adventure inspired me greatly, for he genuinely seemed like a man born out of his time.
I was initially hired by EBERHARD only as a bass player, but once he’d heard me sing he had become intrigued by my voice, and recognizing, as he put it, ‘something unique in it’, a distinctive tenor, albeit unschooled.
Sting. Taken from the book “Eberhard Schoener – Grenzen gibt es nicht” © 2010 LangenMüller in der F.A. Herbig Verlagsbuchhandlung GmbH, München

Memories by EBERHARD SCHOENER:
We had a real friendship. Stewart was always restless and overactive: a young blonde man with an incredibly broad range of interests who wanted to know everything about Bali. He was interested in the Balinese polyrhythms. He really is the strongest and best drummer I’ve ever met. He bounced onto the stage and then struck his drums with an incredible force. This energy came naturally – it wasn’t a forced power as with many rock ‘n’ roll drummers.
Sting was introvert, shy and reserved, but was already convinced that they would make it. He let nobody come near him. We had often listened to classical music together, he wanted to recognise their structure. Later, when we met in the post-Police-time, we talked mainly about classical music. I quickly realised that Sting was an exceptional singer, and I made him sing extremely high while we were recording. He managed it with ease.

Stewart’s brother, Miles Copeland, later took over the management of The Police and fended off all contact between us. The “Munich period” no longer fitted the image of the band and was deliberately excluded by Miles. These three years were never mentioned in their biographies. They were now on a different trip. They toured the U.S., because Miles wanted to breakthrough into America, and they worked like crazy. After two years, everyone knew The Police. That was the beginning of their successful international career.
I did not want to be accused of trying to jump on their bandwagon – so I tried not to meet them. Sting later gave solo concerts in Munich and he called me each time he was here and we met up for a chat. The old familiarity immediately returned.
Stefanie Schoener . Taken from the book “Eberhard Schoener – Grenzen gibt es nicht” © 2010 LangenMüller in der F.A. Herbig Verlagsbuchhandlung GmbH, München