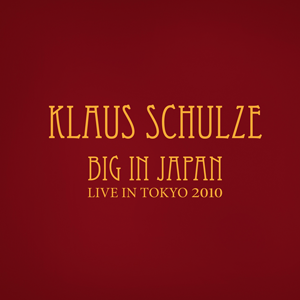 After having made one studio album, and two Live DVDs and albums with Lisa Gerrard, KLAUS SCHULZE thought it was time to give the world back the “pure” KLAUS SCHULZE again. Having been invited by his big Japanese fan, Mr Gen Fujita, he and his crew flew to Tokyo to play his very first solo concerts since November 2003.

The concerts in Tokyo in March 2010 were remarkable for many reasons.

First of all, the Japanese crew rebuilt KLAUS‘ legendary and extraordinary equipment exactly the same way as you can see it at his European concerts. Considering the fact that this equipment includes a lot of rare instruments and devices, the Japanese crew did a great job.

Secondly, the concert itself contained some surprises: It was the first time that KLAUS SCHULZE rebuilt and remodelled his classic “Crystal Lake” (originally released 1977 on the album “Mirage”), renamed here as: “The Crystal Returns”. Also astonishing was the fact that KLAUS played electric guitar – on the track, “Sequencers Are Beautiful” and of course in his own, totally unconventional way.

In total, these were breathtaking concerts combining KLAUS’ tradition and vision: You will love the sequencer sounds as well as the new components. And of course, the DVD gives you the perfect vision of these intense and atmospheric performances.

“Big In Japan” had already been released in Japan as a box-set, limited to 500 copies.

This European version is slightly different: The track “Sequencers Are Beautiful” (in the Japan-Edition only available on DVD) can be found here as the second track on the first CD.

Along with a new stylish package, these historic moments are now available for every KLAUS SCHULZE fan!

The American version is different to the European edition:.
The tracklisting of the two CD’s is the same as on the European Edition, but you will get a totally new DVD with different tracks – this time edited and produced by the famous French film director James Frachon, who already filmed Klaus Schulze on the DVD’s “Rheingold” and “Dziekuje Bardzo”

The Artwork of this edition is blue on silver.

Along with this stylish package, these historic moments are now available for every Klaus Schulze fan in America!