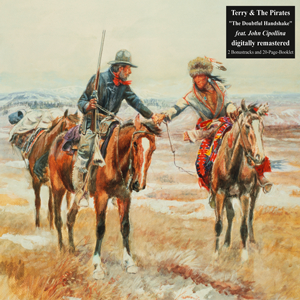 Terry & The Pirates – The Doubtful Handshake

Out of the mist and fog of the San Francisco bay emerged an amazing band that for 26 years treated the Bay Area to some of the best music to ever emanate from out of every nook and cranny of every bar and night club around.

There was a spirit of adventure to their music, sort of pioneering spirit that had permeated the San Francisco Bay Area music scene at that time, especially in Marin County in the early 1970’s.

Now nobody embodied this feeling more than artists like Terry Dolan, John Cipollina, Greg Douglas, David Hayes, and Jeff Myer. They were original, crazy, cowboy “Rock ’n’ Rollers” better known to the world over as TERRY & THE PIRATES.

To many, including Terry, feel that “The Doubtful Handshake” is his best studio album to date and to make this version special we found some rare photos for the booklet, and included two cool bonus tracks to make it more alluring and exciting as well. Moreover Greg Douglass wrote a great introduction and the band members along with their producer extraordinaire reflect on their days thirty years ago on the making of “The Doubtful Handshake”, not to mention playing in TERRY & THE PIRATES.

TERRY & THE PIRATES and Made In Germany Music hope you will enjoy this new edition of “The Doubtful Handshake”.

In 1980 TERRY & THE PIRATES set out to record their first album, though they had been in the studio many times before, this was the first time they went in with the goal of making a record versus just recording some songs, albeit some great songs.
“The Doubtful Handshake” was a group effort with each member bringing in their own contributions to the album. The studio was what would now be considered old school with its multi-track tape, but back then it was state of the art and recording decisions had to be made on the fly by the engineer and producer.
In those days the Pirates were so accustomed to playing together that as Terry put it “We could knock out live basic tracks in one take so we were in and out in one day”, and then over dubbed everything else later. Keep in mind it was 30 years ago since “The Doubtful Handshake” was recorded, and there’s not a whole lot to remember about these sessions, because back then, as one person recalled, “it was better living through chemistry and the family pharmacist was always around”.

The overall consensus concerning the Doubtful Handshake sessions was that they all had a real good time and had lot of fun making music and hanging out together.