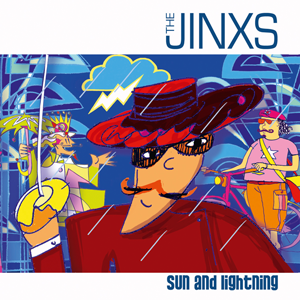 The Jinxs – Sun And Lightning

Two weeks before, The Jinxs, together with 1,500 loyal fans, celebrated their 20th anniversary in the Capitol Hanover and shared the party with their families. The party continued on holiday in Denmark: eight adults and seven children.

After the band first planned that the anniversary concert will be the farewell concert, after the impressive experience of the concert they agreed that the end of Jinxs is not to come.

A band that was hardly reflected in the media and on the other hand still sold out shows in the Capitol Hannover, must have a right to exist.
So they decided to produce a new album. But it took until mid-September, that the five musicians began with the songwriting for the CD.

Under enormous time pressure – the release date for the new CD had already been published in August 2009 for December 2009 – the material was composed, recorded and mixed within ten weeks.

The result is brilliant: “Sun And Lightning” contains eleven varied songs that reflect the whole spectrum of The Jinxs.
Soulful ballads, punchy songs and a portion of atmospheric folk.

The Jinxs are back and better than ever!

“Sun And Lightning ” now is released in a new edition on MiG with three bonus tracks:

These three tracks were recorded in 1998 in the Horus Sound Studios, produced by Marcus Wichary (Terry Hoax), first released 1998 in a strictly limited edition which was sold out quickly at the time. For these songs stylistically fit very well with the new material, the band decided to release these tracks on the new CD “sun and lightning “again.

Also of note is the design of the CD, which was designed by Tim Davies, who has worked for great artists such as Pink Floyd and Robert Plant.

The Jinxs are still here to stay.

Independent, naive at times but always honest – like their music!