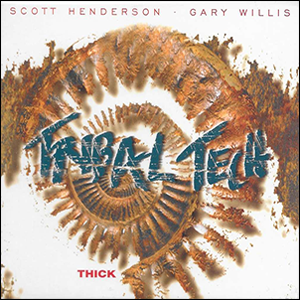 Scott Henderson – guitar, amp, one pedal and some delays Gary Willis – a few basses and a couple of pedals Scott Kinsey – a multitude of keyboards too numerous to mention Kirk Covington – drums and that’s about it.  For their ESC Records debut, the members of Tribal Tech threw caution to the wind and went into the studio with no gameplan, no roadmaps whatsoever, let alone rehearsals. With unprecedented musical daring, they simply let tape roll and captured the moment, trusting their instincts and group chemistry to spontaneously shape the music. The result is THICK. Their most freewheeling, exhilarating and provocative project in Tribal Tech´s 13-year history. “Basically, instead of writing in a little vacuum in our respective home studios, we jammed it all up in the studio,” says Tribal Tech co-founder and bassist Gary Willis. “It´s kind of a scary step, just because we really had something that worked before. But we kind of did it to death so it was definitely time to do something new.”