Mojo On My Side (Hypertension-Music) 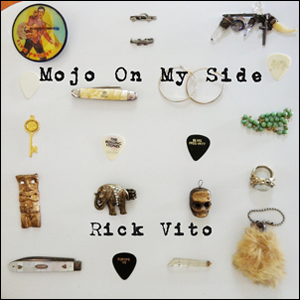 Rick Vito – Mojo On My Side

For over two decades, Rick Vito has captivated listeners all over the world with his own unique blend of Blues, Rock & Roll and R&B. His stellar guitar work has enriched the recordings and performances of such legendary artists as Bob Seeger, Bonnie Raitt, Jackson Browne, John Mayall’s Bluesbreakers, Roy Orbison, and many, many others.

Perhaps best known as a member of Fleetwood Mac, Rick brought back a passionate bluesy quality to the band’s music long missing since the days of Peter Green.

2008 Mick Fleetwood and Rick Vito joined again to for the Mick Fleetwood Blues Band – a Band which reflects the legendary Blues phase of Fleetwood Mac, their album release “Blue Again!” was nominated for the Grammy.

His brand-new album “MOJO ON MY SIDE “showcases” Rick’s, unique, blues-style, slide guitar. Blues Rock in the tradition of Fleetwood Mac with a swing influence.

The emphasis on this new CD is on basically guitar-bass-and drums arrangement with a small help by horns. The music can be described as “guitar-driven,” “bluesy” or “rootsy,” but in all cases it is very “American.”

Rick´s philosophy when making a new CD is to try and blend the traditional with something new and unique. He does not stray too far from his roots, because he is comfortable here because that is his best skills.  His new CD stays true to this tradition and will appeal to anyone who appreciates solid rhythms, tasty guitar work and cool songs played, not to conform to any current trends, but for the sheer love of the excitement of the music!

This album is a sure-fire pleaser for all guitar blues and roots-rock music fans!