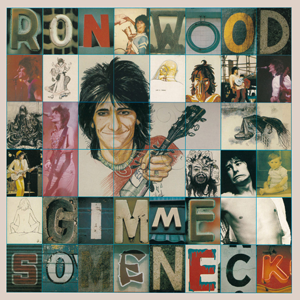 Gimme Some Neck, the title of Ron Wood’s third solo album from 1976, refers not to any vampiric tendencies on the ace guitarist’s part but rather to his exuberant attitude towards playing anything with four or more strings. Give this man enough neck and you’re liable to wind up with a pair of terminally scrambled frontal lobes.

Producer Roy Thomas Baker has done his usual excellent job of capturing a sound that boasts the kind of loose, roadhouse feel that has always been at the core of great rock and roll from day one. There’s a music vitality in these grooves that’s far removed from the sterile product that so often pops out of studios.

The stand-out track here is “Seven Days”, a song penned exclusively for Wood by Bob Dylan. Powered by the man behind the beat for the big Mac, Mick Fleetwood, the tune sets Wood’s searing pedal steel work against a remarkably expressive, Dylanesque vocal. You’ll probably find it hard to believe that Mr. Dylan didn’t drop by the studio to do the singing himself.

Wood composed eight of the eleven selections and most of them are blazing examples of classic British Rock’n’Roll, centered around the slashing rhythm stylings that helped establish the faces as one of the premier rock bands of the 70’s and contributed so much to the recent rejuvenation of the Stones. “Infeckshun” sports a superb mid-song jam that only comes from complete empathy between the musicians, “Buried Alive” features the full Stones complement on the album’s hardest-driving rocker. “F.U.C. Her” blends incisive, witty lyrics with a musical marriage between Chuck Berry and funk. The album closes with what could well be Wood’s motto towards Rock’n’Roll and life in general, “Don’t Worry.”