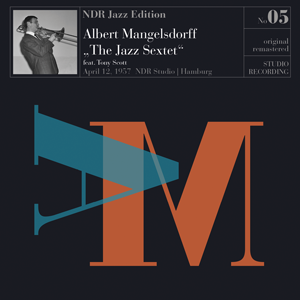 Presskit_PRINT (1.0 MiB, 1 hits)
You do not have permission to download this file.

Presskit_WEB (483.0 KiB, 2 hits)
You do not have permission to download this file.

Hans Gertberg, since 1952 jazz editor and as such responsible for “Jazz at the NDR”, had invited an ensemble to Hamburg that was on a European tour and in at least one way promised to shine a little light on the preferences of the trombonist Mangelsdorff. At that time he was already shaping the West German scene considerably.

“The Jazz Sextet” was the name of the illustrious tour ensemble which also showed up at the Hamburg studio. It followed the current developments up to sacrificing the principally always more harmonizing piano. The moods and parts are arranged with the instruments completely without the piano keys: Mangelsdorff and both the Cool and West coast masters Bob Cooper and Bud Shank. The guitarist Attila Zoller does not so much bring about harmonies into the recording but another solo part. The foundation for the ensemble sound are laid by the at that time extremely busy drummer Karl Sanner and by the bassist Gary Peacock who in those days of the Hamburg session is just 21 years old.

For one track, the three part horn section is reinforced by another “American in Europe”: the clarinet player Tony Scott, during these months also on his way on the old continent, is joining the sextet. And with him, the recorded version of Jerome Kerns “Yesterdays” evolves promptly (and totally unusual for that time!) into a 20 minute trip around the world with a diversity of sounds and rhythms.

One can well imagine that this Tony Scott is nobody to take familiar paths in the future. Soon, he chooses Rome as domicile. And what does this sextet play without Scott? Pretty much from the repertoire of the standard titles. Very intelligent and relaxed is the bands’ use of Shearing’s and Gershwin’s song and sound structures. Who feels like labeling, may call it “West coast“ – but primarily you can hear a self-conscious and extremely well sorted ensemble, in which, of course, the voicing among Shank and Cooper particularly reminds of how much they are used to the juxtaposition of their instruments, complemented by the flute (Shank) and the oboe (Cooper). The enormous appeal of this recording from April 1957 makes up   that six, briefly seven musicians of distinction are engaged in exchanging their thoughts, in the middle of one of the most creative phases in jazz during the post war era. Then the high art of listening is required as well.