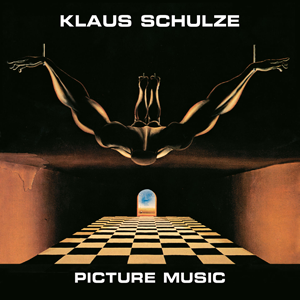 PRINT Kit (2.4 MiB, 1 hits)
You do not have permission to download this file.

Owing on the strong emphasis on rhythm, in combination with those twittering and rising synthesizer sounds, “Pictue Music” gains excitement and a sublimal agressivity, so the listener never gets demanding. (“Sounds”/Germany, May 1975)

A British journalist wrote about “Pictue Music”: “…hypnotic quality. Klaus’ first true synth album.” What you actually hear is mostly just one synthesizer, the (today historic) EMS VCS 3, which was shortly later exchanged for the EMS Synthi A, which is in fact the same instrument but just smaller and very handy for transportation. After all, Klaus started already in 1973 to give concerts, and he was – as his old pals from Tangerine Dream – for many years the only electronic music artist who travelled a lot to give concerts all over Europe.