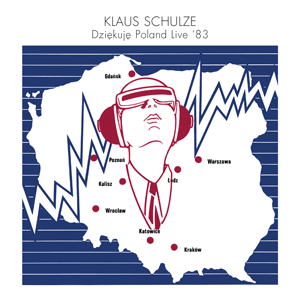 PRINT Kit (1.5 MiB, 1 hits)
You do not have permission to download this file.

Re-release of the Klaus Schulze album „Dziekuje Poland“ originally released in 2001. This favoured Schulze title has been enhanced with generous Bonus and detailed liner notes.

„This collection is an absolute must for the serious collector and a good starting place for the novice – my highest recommendations for this album! (Synthetic Pleasure/USA, July 1984)

In 1983 Poland was still behind the iron curtain but to get permission to perform concerts there was quite easy because I was playing instrumental music. Had I written songs with lyrics, they probably wouldn’t have let us come into the country. So we accepted thje invitation made by the polish promoter. We never had any problems with guys from national security there, although we may have tempted fate when we played in Gdansk. We performed there in the same venue where Lech Walesa (leader of the opposition union Solidarnosc) had given a speech  the day before and Rainer and I went on stage on stage and made the V for victory sign. This wasn’t at all politically motivated, it was meant to be a sign for love & peace. Nevertheless they edited out the photo with of us with th V-sign in the polish edition of “Dziekuje Poland”. Before the concert, Rainer said to me, “Let me start at the piano alone!” I thought, sure, why not? He went on and played the Polish national anthem and the audience went wild!