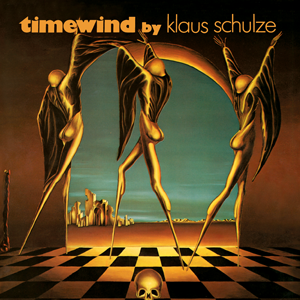 PRINT Cover (2.0 MiB, 0 hits)
You do not have permission to download this file.

PRINT Kit (2.3 MiB, 2 hits)
You do not have permission to download this file.

WEB Kit (1.7 MiB, 1 hits)
You do not have permission to download this file.

Evolving slowly but deliberately over the course of each album side, Timewind has been deemed an electronic version of an Indian raga. It resembles in many ways a longer variation of the third track from Tangerine Dream’s classic 1974 album Phaedra, “Movements of a Visionary”, but it remains a transitional work somewhere between the Krautrock of Schulze’s earlier output and the Berlin School character of his following efforts. The intention of Timewind was to invoke a timeless state in the listener.

Both track titles are references to the nineteenth-century composer Richard Wagner, Bayreuth is the Bavarian town where Wagner had an opera house built for the first performance of his massive Ring Cycle. Wahnfried is the name of Wagner’s home in Bayreuth in the grounds of which he was buried in 1883. It is also a pen-name used by Schulze himself.