Words from The Wilderness 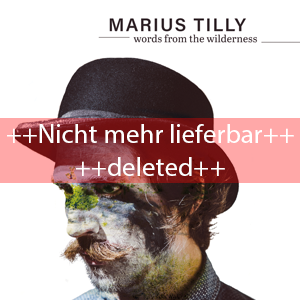 PRINT Cover (2.4 MiB, 0 hits)
You do not have permission to download this file.

Presskit PRINT (7.8 MiB, 0 hits)
You do not have permission to download this file.

Presskit WEB (6.5 MiB, 1 hits)
You do not have permission to download this file.

Words From The Wilderness

Marius Tilly is a musical wanderer between worlds who has made up his own crossover atlas from maps of blues, punk, soul, and psychedelic rock starting in the Ruhr area, Germany. He is on a constant quest to find new routes which are too thrilling to end somewhere. With Tilly’s fourth album Words From The Wilderness the journey heads to daring arrangements, sometimes steep musical theories, unheard sounds and new personal insights about the world. The album appears to be more courageous, more profound and also a bit more serious than its predecessor Nebula Rising – more like a glass of whiskey on the rocks than a freshly tapped pilsner.

Over decades, from the roots, blues has grown to such a huge genre tree that it is not necessary for his leaves and fruit to resemble one another. In Scandinavia bands like the Blues Pills, Troubled Horse or Siena Root revive the essence of blues influenced hard rock for the nth time. In the US home of the blues, thanks to Jack White, Rival Sons or Black Stone Cherry strong new branches grow from the great heritage. European bands like The Brew or Navarone do as well live on blues like the psychedelic-ecstatic sound of Kadavar, whereas Led Zeppelin have found worthy estate executors in the Australian Wolfmother.

Somewhere in that tree also sits Marius Tilly. Musicians like him profit from the fresh wind that is blowing high up in the crown of the modern blues tree. But how much of these roots is still audible on Words From The Wilderness? That’s merely a question of perspective. Of course, Marius Tilly knows the complete way from the root to the top by own experience.