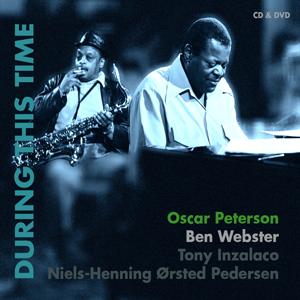 PRINT Cover (528.0 KiB, 0 hits)
You do not have permission to download this file.

WEB Kit (3.2 MiB, 4 hits)
You do not have permission to download this file.

During This Time
(Art of Groove)

It is not what you say, it is the way you say it. This phrase sums up what could be seen as one creed of jazz, the kind of music establishing the much cited “own sound” as the measure of all things. Those who do not possess it are threatened by drowning in the anonymity of insignificance.

Ben Webster’s unique sound earned him his nickname “The Brute and The Beautiful”, a coarse, hard and guttural sound in more rapid tempos, a warmer, softer, sometimes lightly whispered sound in ballads (it is only mentioned as a side note that Webster’s moniker “The Brute and The Beautiful” reflected his Dr Jekyll and Mr Hyde personality. He could be the incarnation of kindness only to be transformed into a ticking time bomb by the demon alcohol).

Oscar Peterson none the less belonged to a group of individualists one could recognize in mere seconds. It would be pointless to mention this if the pianist would not be reduced in a hurry to his breath taking technique over and over again (comparable only to that of an Art Tatum or a Martial Solal). However, the fiery was just one of the Canadian heavy-weight’s sides. Cast into the shade by his own virtuosity was Peterson the poet.

Both North Americans knew each other well. At the very beginning of the 50’s Norman Granz had integrated them in his JATP all-star package, and afterwards they cooperated in the studio more than once. Their interaction profited not least by the fact that Webster not only knew Peterson well but piano playing in general. He had made a name for himself as a pianist at the beginning of his career and above all, mastered the art of the stride piano.

Presenting this pair twenty years after their first encounter promised an evening of swinging acoustic mainstream out of the extraordinary – and still in a decade “where the world had gone electric” and rock jazz was on the brink to experience his heyday. (It is among the achievements of public broadcasting to not only record forms beyond mainstream but also those that were not en vogue at a certain time or in line with the contemporary zeitgeist. In this regard, the NDR Jazz Workshop which was introduced in 1958 was and is a shining example up to this day.)

At the 84th NDR Jazz Workshop at the Funkhaus Hannover Webster and Peterson made a guest performance together with a rhythm section that met the high expectations. Niels-Henning Ørsted Pedersen had just been called into the pianist’s trio, one the very few bass players that could technically match him. At that point Webster had already played more often with NHØP, because he had moved to Copenhagen in the mid-Sixties. As a drummer they had taken on Tony Inzalaco (the only living musician of this quartet today) who was already working in Germany at that time – among others with the Kenny Clarke/ Francy Boland Big Band, the orchestra of Kurt Edelhagen and the NDR Bigband.

The repertoire showed “both sides” of Webster as well as Peterson (including two titles by the tenor saxophonist and four by his former employer Duke Ellington, among them “Cotton Tail”, a piece that the Duke had written in 1940 as a special feature for Webster).

The CD and the DVD are a pure delight for ears and eyes, not least because of the excellent sound quality and the sensitive camera work. It also is a historical document: the last clash of Peterson and Webster who died in Amsterdam a few months after the concert in Hannover.