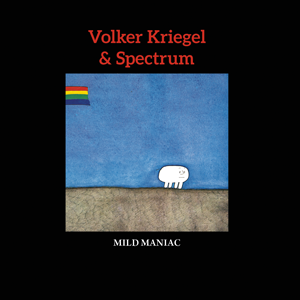 Presskit PRINT (7.1 MiB, 0 hits)
You do not have permission to download this file.

Presskit WEB (5.7 MiB, 0 hits)
You do not have permission to download this file.

Volker Kriegel (born 1943, died 2003) is one of the best and most important German jazz guitarists of the post-war period, internationally highly acclaimed he pushed the innovation of jazz rock. The inner circle of friends around his wife Ev Kriegel has now made an incredible treasure of old recordings from his various creative phases audible again. Previously unreleased live recordings as well as well-known material from his albums have been digitized and lovingly remastered. These audiophile pearls form the “Volker Kriegel Archive”, which is now released on Moosicus.

The first release of “Mild Maniac” came in 1974 as a LP. Beside Volker Kriegel on the guitar they also played: Rainer Brüninghaus on the keys, Eberhard Weber on bass and Joe Nay on drums. Guest in the studio was Peter Giger on the percussion.

The bonus tracks are live recordings of the “Idsteiner Schlosskonzert 1977″.