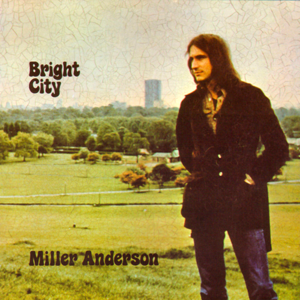 From 1969 to 1971 Miller Anderson was a member of The Keef Hartley Band with whom he not only played Woodstock festival but also made five albums during that time: “Halfbreed”, “Battle of North West Six”, “Overdog”, “The Time is Now” and “Little Big Band Live”. After the release of the last album he left to pursue a solo career recording his first album “Bright City” for Deram Records. He was supported by Gary Thain and Peter Dines from the Hartley Band as well as Mick Weaver (Wynder K Frogg), Junior Campbell from Marmalade, Neil Hubbard from the Grease Band, Lyn Dobson, Eric Dillon, Harold Beckett and Madeline Bell (Blue Mink) with Tracy Miller on backing vocals.

The seven track album was originally released in 1 971 and featured “High Tide and High Water” which he later re-recorded for his 2004 album “Bluesheart”.

1. Alice Mercy (To Whom It May Concern)
2. The Age Of Progress
3. Nothing In This World
4. Bright City
5. Grey Broken Morning
6. High Tide, High Water
7. Shadows ‘Cross My Wall