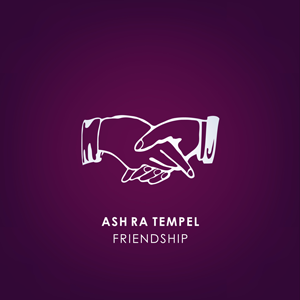 Next to Tangerine Dream Ash Ra Tempel is also one of the pioneers of the Berlin School. With their self-titled debut album, the 1971 formation consisting of Hartmut Enke (bass), Manuel Goetsching (guitar) and Klaus Schulze (drums) bounded rock and blues elements to their completely deconstructed and radical new sound collage.
Although Manuel Goettsching and Klaus Schulze performed with one another during their solo careers and proved their musical with innovative guitar work and electronic music, it was first in 2000 that they found a brief spell as “Ash Ra Tempel” together.
Julian Cope (author of „Krautrock-Sampler”) invited Goettsching to his CORNUCOPEA Festival in London, providing him a wonderful opportunity to play an Ash Ra Tempel reunion concert with Goettsching and his colleague Klaus Schulze, which took place at the London Royal Festival Hall in 2.4.2000.
The “Friendship” recordings came about during the preparations for the concert. Goettsching and Schulze united tradition and vision but instead of reactivating sounds from the 70s, the spirit of this unique liaison flowed through each note of this contemporary album, which both musicians combined with their enthusiasm.
“Friendship” will be released in November 2014 on Goettschings own label MG.ART. The concert recording “Gin Rose” will be rereleased in March 2015. Both albums once were limited releases and have not been available for years.