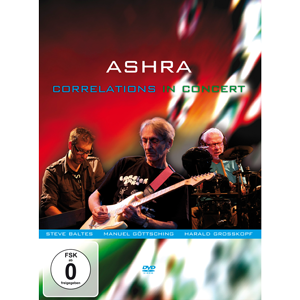 A high quality video of the first concert performance of the legendary ASHRA LP “CORRRELATIONS” (Virgin Record, 1979), produced by Manuel Göttsching in collaboration with the UK music producer Mick Glossop in 1978 for VIRGIN RECORDS.
For 15 years, the first concert by Manuel Göttsching with his band ASHRA in Berlin 2012 and its release.
In addition to the concert there is bonus material included:

–  interviews with the participants in the LP production in 1978, so with Mick Glossop, back then producing for Virgin Records and today one of the most important and multi-awarded music producer in the UK, who is internationally successful in the music business for 35 years, with Eberhard Panne (Panne & Paulsen sound studio in Frankfurt/Main), Hannes Kraus (the famous Dussmann shop, Germany) and Manfred Schütz (formerly SPV). The four men describe what makes the album CORRELATIONS eternal/immortal.

–  sound check, where also the historic site of the Berlin Ufa factory is seen.

– an 8-page booklet with numerous photos and information about Manuel Göttsching and his bands, including a text by Mick Glossop about the special recording and mixing techniques of CORRELATIONS, and in Memoriam of the great English graphic designer Storm Elvin Thorgerson (Hipgnosis) who died in April 2013, there are his explanations on the concept of the cover design. Hipgnosis not only stands for the cover of CORRELATIONS but also for the artwork of the albums by Pink Floyd, Led Zeppelin, Black Sabbbath, Genesis etc..