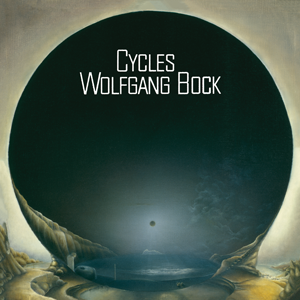 The electronic-musician Wolfgang Bock comes from the environment of Klaus Schulze and his debut “Cycles”, released on vinyl in 1980, is strongly influenced by him.

The title track, which takes up the entire first side of the original vinyl edition, is still completely in the tradition of the Berlin School. Slowly wafting sound arcs and mystical mellotron choirs determine the opening of the track. After some time, the characteristic sequencer rhythm sets in, supplemented by real drums, and the track is taking up speed.

On the second side of the original album, however, Wolfgang Bock then hits more independent tones. The first part of “Robsai” consists mainly of powerful organ sounds, the second part on the other hand reminds a bit of some works by Vangelis (like “Albedo 0.39″ or “Spiral”): Rejoiced synth sounds accompanied by heavy drumming. About halfway through the track, the synths fade away, and the rest of “Robsai Part II” is a pure drum solo.

As bonus the album contains the track “Wir fliegen ins All”, which Wolfgang Bock aka Peter Flieger recorded in 1981 in Berlin’s Paragon Studios and which was released as an EP in 1982 under the pseudonym Helicopter.

“Cycles” is released in remastered and digital form for the first time since 1980.