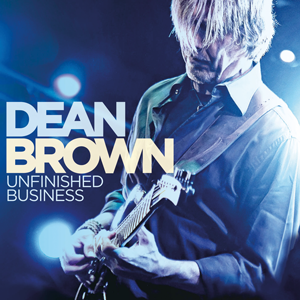 On “Unfinished Business”, veteran guitarist Dean Brown, whose scintillating six-string work can be heard on over 200 recordings as a sideman, steps out with his fourth dynamic outing as a leader. Joining him on this eclectic offering, which ranges from hard-hitting funk to lovely ballads, soothing samba flavored grooves, Latin-tinged jams, greasy organ-fueled blues and cool jazz, are longstanding colleagues Marvin “Smitty” Smith on drums and Gerry Etkins on keyboards.

Brown is particularly pleased with the nature of the recording during these “Unfinished Business” sessions. “All these tunes were recorded live in the studio,” he says, “so there’s a lot of interaction and not a lot of overdubs. I’m trying to protect that kind of stuff. I just like the integrity of the idea that all the vertical stuff happens at once. I love that live feeling.” That kind of immediacy is felt on all nine tracks from “Unfinished Business”, which stands as Brown’s most ambitious release to date.