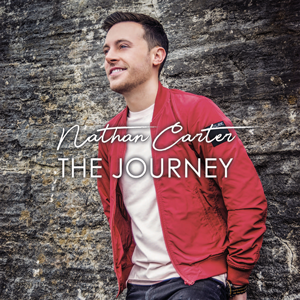 Nathan Carter is the most successful live act across the venues of Ireland at this moment in time. He hasn’t done badly in the national sales charts either, with four number one albums following his two number one singles and two number one live DVD’s elevating him to household name status.

So, equipped with his accordion, but also playing piano and guitar, the young Nathan started touring the club scene, playing covers from the great Nashville tunesmiths and at the age of 16 had a seismic wakeup call when his dad brought him onto the building site and gave him a sensible job. Nathan lasted a week, and after his parents refused to indulge him in any fantasy idea of his even dreaming of earning a living playing music, his Nan [Gran]came to the rescue and from there on drove him from club to club, from Liverpool to Birmingham, to London, to Donegal.

Like Bob Dylan’s ‘Never Ending Tour ‘, Nathan was jumping out on stage every week for over 3 years from the head to the heal of Ireland, when almost from nowhere, at least to the Irish national media, his single release of the Bob Dylan song “Wagon Wheel” hit the number one spot in the Irish charts. The secret was out, and Nathan rapidly moved from the dance halls to the city halls, with live audiences of 2 – 5,000 fans.

His next two albums also hit the number one spot, and he signed to Decca Records, his first album for them, “Beautiful Life “, mostly made up of his older songs went 4 times platinum in Ireland, as he appeared on The Late Late Show`, The Nolan Show, Glor Tire, he even has a role in an Irish language TV show.

He is acknowledged as the catalyst to the rebirth of popularity of Country Music in Ireland, and the dance craze that has swept the country. BBC 1’s The One Show made a special feature on Nathan and the dance craze he inspired, and RTE TV gave him his own TV program, “The Nathan Carter Show“ at Christmas, 2015, which when aired received one of the highest national audience viewing figures of 2015 (600,000 viewers).

2016 saw the release of Nathan’s first UK album of new songs, many which are self-penned, entitled “Stayin’ Up All Night“.

Nathan`s new album went straight to No 1 in the Irish Album charts, beating international acts Beyonce and Drake to the NO.1 spot.