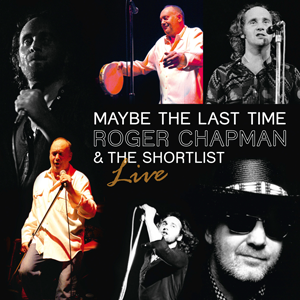 As former singer, songwriter and front man with famed UK rock bands Family and Streetwalkers and in 1978 starting a successful solo career, the iconic voice of Roger Chapman and his barbed wire and wine delivery has made him one of the most acclaimed singers in the genres of rock, blues and soul. An esteemed solo career that has included him being presented with the award of Best Singer at the 1982 German music awards, two appearances on the famed TV rock show Rockpalast, hit album and single releases and lending his vocal skills to the Mike Oldfield hit Shadow On The Wall.

Never one to ever contemplate retirement Roger returned in 2009 with a new album and a busy touring schedule in the UK and the rest of Europe. HIDE GO SEEK contains a mammoth twenty-eight tracks of demos, lost gems and alternative versions of familiar titles. Some of the recordings are over twenty years old and have never been heard before, yet still sounding fresh and vibrant today.

“The summer of 2011 I saw myself and The Shortlist back out on the road for a round of European City & Biker Festivals. It`s always nice to play the old favourites such as ‘Shadow On The Wall,’ ‘Who Pulled The Nite Down’ etc., but it`s also nice to be loose, not tied down too much. Fortunately the audience here came to party which added a wonderful vibe to the evening, hence the inclusion of ‘Let’s Spend The Night Together’, ‘Maybe The Last Time’ was a one off we rehearsed on the sound check as a tongue in cheek tribute to Bill Wyman for a shared festival appearance coming up in the UK, Bob Dylan’s ‘Blind Willie McTell’ is a personal favourite of mine – it is just such a great song.

This particular night at the Munich Harley Festival found the Shortlist to be in particularly fine form and is I believe an excellent sound snapshot of where the band were musically in the summer of 2011.” – Roger Chapman