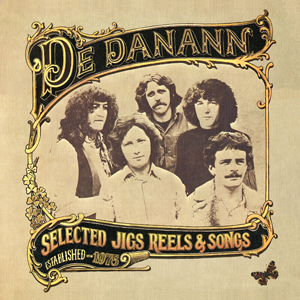 De Danann – who began performing and recording under the name De Dannan in 1985 – have played an influential role in the development of modern Irish music. Although they’re remained rooted in Ireland’s musical tradition, the band’s virtuosic instrumental skills and expressive vocalizing has enabled them to reach out to a worldwide audience. According to Earle Hitchner, music writer for The Wall Street Journal and The Irish Echo, “any serious discussion of the evolution of Irish traditional music over the past quarter century must include the enormous contribution of De Danann.”

The band has received “Best Celtic Album” awards from NAIRD (National Association of Independent Record Distributors) for their albums “Star-Spangled Molly” in 1981, “Song for Ireland” in 1983, and “Ballroom” in 1987.

Through the years De Danann emerged several successful soloists such as Maura O’Connel, Mary Black, Caroline Lavelle and Dolores Keane (US Americana & Country star Nancy Griffith: “Dolores Keane, the queen of the soul of Ireland”). In 1976 the five Irishmen from the County Galway were in the studio of the famous German producer and engineer Conny Plank (Kraftwerk, Ultravox, Eurythmics amongst many others) in Wolperath near Cologne to produce their album “Selected Jigs Reels & Songs”. The album was released in 1977 by German folk label Voggenreiter/Intercord in Stuttgart. Johnny Moynihan of Planxty reinforced the quintet in the studio at that time and played bouzouki and mandolin on the album. From August 2022, “Selected Jigs Reels & Songs” will finally be available again after 46 (!) years, and then also on CD and digitally.