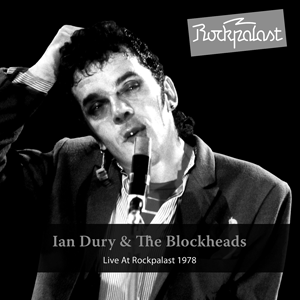 When the British punk and new wave explosion befell not only England but also the rest of Europe, the media including German television were more than bemused by this phenomenon and reacted reserved.

In the case of Ian Dury & The Blockheads though, the editors of Rockpalast flashed into action with an assured sense of style: Only a few months after Ian Dury‘s debut album in 1977 “New Boots and Panties!!” had been released, for February 21, 1978, the band was invited into the WDR studio. In retrospect, Ian Dury’s anti-establishment look, his confidently lived handicap as well as his rude and manic performance must have been quite a culture shock.

That is not the only reason why this show is such a solitary piece of music history: Apart from the classic title “Sex And Drugs And Rock’n Roll” (which soon became a dictum) the band is presenting nearly the complete album “New Boots and Panties!!”

Thanks to the magnificent Blockheads, the performance mixes the aggressiveness of punk, a musical diversity and colorfulness with a good portion of humor and self-mockery also allowing elements of jazz and vaudeville.

Especially Chaz Jankel on keyboards and the exceptional saxophone player Davey Payne shine with emphatic interludes and soli that blend well. An amazing fact considering the Blockheads were founded only after the debut album and had just finished their first short tour.

The unconsumed vigor, the boisterous energy – together with these superb songs every one of which a potential hit – turn this concert into an unforgettable experience.