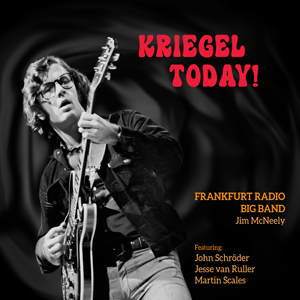 For some time now there has been a strong initiative to keep the oeuvre of guitarist, author and illustrator Volker Kriegel (1943 – 2003) alive. Together with the company MIG Music, six albums with extensive material/bonus material from the private archive of Volker Kriegel have been published/re-released so far. Even previously unknown material – carefully restored and remastered – was thus made available to interested listeners, with the support of Ev Kriegel (wife of Volker Kriegel). In 2018 we were very pleased to find out that the Frankfurt Radio Big Band was going to celebrate Kriegel‘s work with two homage evenings in the “hr-Sendesaal“ in Frankfurt, still in the same year: The year when Volker Kriegel would have turned 75.These two wonderful concerts were given on November 22 and 23. Ev Kriegel suggested a release on CD and an agreement was soon reached with the management of the band to combine the best of the two evenings on one album. A bridge from Kriegel’s original recordings to the present was successfully constructed. The previous recordings are now perfectly complemented by today’s brilliant live interpretation by Jim McNeely and his much larger line-up. And so the importance of Kriegel as an essential pioneer of Jazz-Rock was demonstrated in a very impressive way. Very suitable header: “Kriegel Today!“

But what would his music sound like today? Jim McNeely, head of the Frankfurt Radio Big Band, was creating highly inspiring big band arrangements for two concerts in Frankfurt and demonstrated that Kriegel’s music, composed a good forty years ago, is still captivating today and definitely worth arranging for a large jazz orchestra. This music – a selection of immensely varying pieces from the early seventies is now available here – was both complex and popular, refined and catchy, with its finger on the pulse of the times and yet confidently re­flecting his own ideas of sound. And always based on the solid ground of harmonies. To live up to this, Jim McNeely divided the highly original art of the composer-guitarist between three guitarists, in order to make the broad spectrum of this sound world audible in an appropriate way, and also to avoid any direct comparison with only one soloist: these are the hr-Bigband guitarist Martin Scales, John Schröder from Frankfurt, drummer and guitarist in various international formations, and finally the Dutch Thelonious Monk Prize winner Jesse van Ruller. In music, Kriegel was never a dogmatist. Fusion, the magic word of those days, could almost have been coined by him. But today, the infl­ationary trend of current jazz rock melange would probably put him off. But the albums “Spectrum“, Inside: “,Missing Link“, “Lift!“ and “Mild Maniac“, all of which McNeely has drawn on for his program, are still bubbling with novelty, one can feel the adventure rising from the interplay of different sound realms, and the joy of creative confrontation. A good idea therefore to enlist John Schröder, a high-speed guitarist like John McLaughlin, who does not know pauses, and with a fantastic virtuosity and harmonic advancement clearly wishes to chase every expressive phrase by an even more expressive one. Martin Scales again, a master of many styles of jazz all the way to the frayed fringes of rock music, is closer to the blues and to an exuberant, Hendrix-oriented sound. And Jesse van Ruller has the serenity and ease of a Jim Hall, allowing him to endow ballads with a wonderfully lyrical injection. Together with the brass section of the big band, the guitarists thus repeatedly run their rhythmically-melodically parallel phrases at an insane speed, almost taking the listener‘s breath away. But the soloists of the hr-Bigband, above all the saxophonists Tony Lakatos, Heinz-Dieter Sauerborn and Steffen Weber, the bassist Hans Glawischnig and the drummer Jean-Paul Höchstädter, also join their counterpoints to the overall concept with unwavering timing and sensual sonority. If Kriegel had been able to hear it, perhaps only one word would have come to his mind: magic! 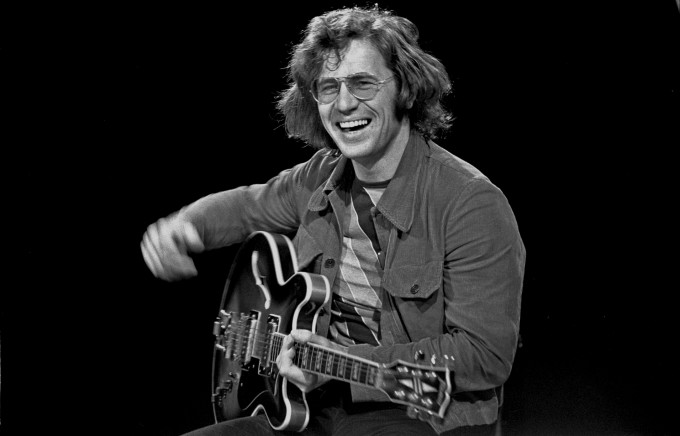 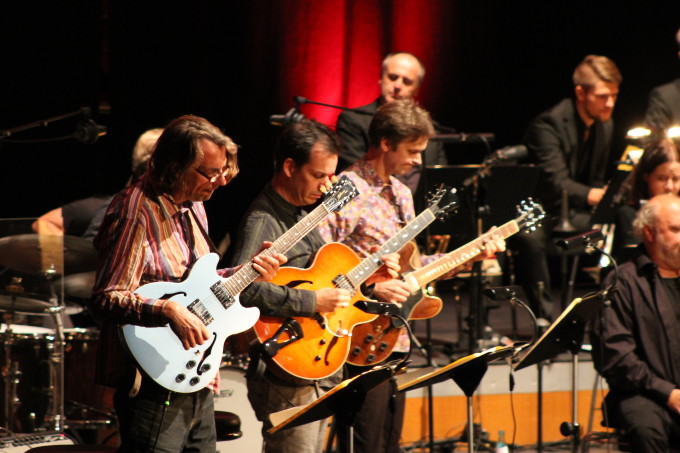 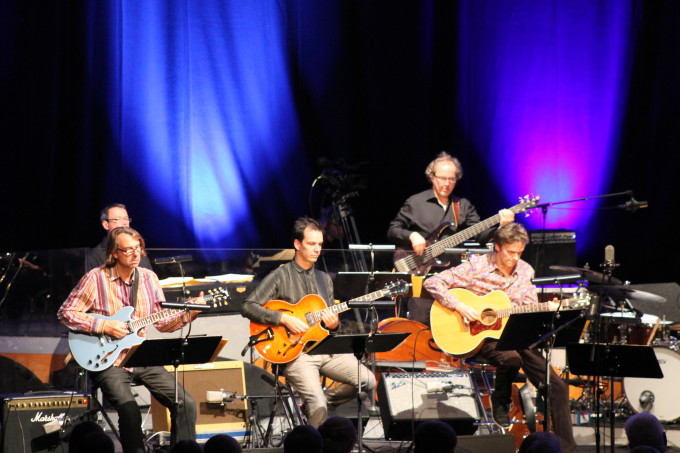