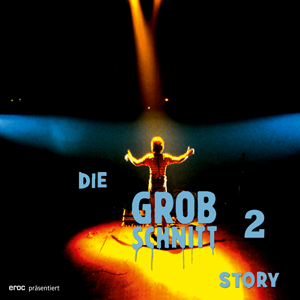 It’s 1998 and time to continue the story. And above all it gets more and more important to introduce the picture of a band which is still considered by so many as “the best German live act”, to all those who never had the chance to experience this legend live on stage.

There was always a discrepancy between GROBSCHNITT’s albums and their live performances. The often uttered statement “you never come across on record as you do live” definitely had it’s right. On one hand a studio recording only shows a freezeframe of a working process done with more or less perfection, while performances in front of a living audience are completely different from “performances” in a soundproof recording-room. Like most of Rock History’s bands, GROBSCHNITT also succumbed to this fact. On the other hand there were two basic differences that raised GROBSCHNITT above many other groups: GROBSCHNITT offered much more than “only” music on stage. And GROBSCHNITT existed that long, so several generations of fans only got to know their specific timeframe. Hardly any fan who enjoyed The Crew rocking in 1968 and 1969 the Beat-Festivals at the Vestlandhalle in Recklinghausen, still attended the debut performance of Rockpommel’s Land in 1976. And nobody who experienced GROBSCHNITT’s live performances with two drummers in 1971 sang along when they played “Der Weg nach Haus” at their very last concert ever on 4th of December 1989 at Hagen City Hall. Many of those who still consider themselves as absolute die-hard-fans never saw “Baer” on bass guitar (1970 til 1975) or “Mist” on keyboards (1973 til 1982) live on stage because they joined in later. And others never could experience the band live. This makes it even more important to create with the GROBSCHNITT-Story a comprehensive insight, to get rid of rumours, conjecture and envy. GROBSCHNITT were not (only) the “Sauerland Lunatics”. In addition to that they scarcely were those typical impassive representatives of clumsy Teuton music somebody somewhen branded as “Krautrock”. Also it is inappropriate to consider them a late 60s hippie-commune of hempseed brains. Over decades GROBSCHNITT were to a great extent an unbelievable hard working creative bond of talented musicians with ideas in many cases far ahead of their time.

It is kind of idle when nowaday’s generations are chasing acts who try to cover up their helplessness with e.g. martial affectation and fireeffects and thereby always keep their eyes on the profit. GROBSCHNITT set the stages on fire right from the beginning using nothing but fun and music to light them up. Promotion and money were no matter at all.

GROBSCHNITT-Story 2 therefore provides further insights to the show, the backstage area and soundexamples that were unreleased up to this day for reasons whatsoever. So the chronic of “canned” GROBSCHNITT gets longer, more colourful and much more complex and thereby further approaches the actual character of this unique band, that offers material for at least a 1000 stories.

This new issue of The GROBSCHNITT-Story was remastered with the latest technical achievements and now finally transfers the recordings of our long history how it always was intended.